Odisha Channel Bureau
Balangir: The Bharat Petroleum LPG bottling plant at Balangir was dedicated to the nation by Odisha Governor Ganeshi Lal at a glittering ceremony on Friday.

Initially, the LPG plant was proposed to be dedicated to the nation by Vice-President M. Venkaiah Naidu. He had come up to Raipur but could not make it to Balangir due to bad weather conditions. 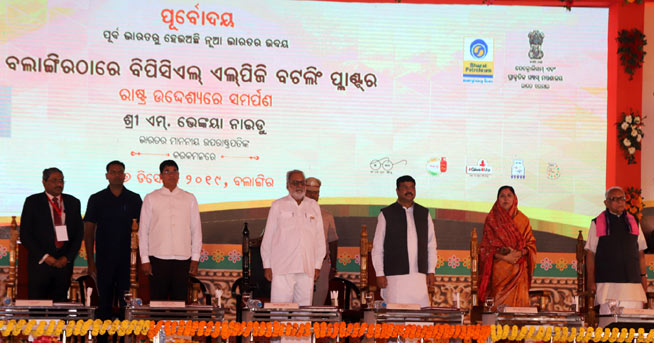 In his audio message which was played at the ceremony, the Vice-President complimented Bharat Petroleum for completing the state of the art LPG plant at Balangir within record 19 months, three months ahead of schedule. With the commissioning of the LPG plant at Balangir, people of the region would be supplied with hassle free cylinders from now, he said.

The foundation stone of the LPG bottling plant was laid by Pradhan on May 21 last year. This plant has been completed at a total project cost of Rs. 103 crore.

Addressing the gathering, Pradhan said that there were only 13.20 crore LPG consumers in the country till 2014 and now it has crossed 27 crore and in Odisha it has crossed 80 lakhs.

This new plant will benefit 14 districts of the western part of the state and more than 150 trucks will be engaged in supply of LPG cylinders to different parts of the region generating more than 500 direct and indirect employment, Pradhan said.