Nuakhai is the most widely celebrated festival in the western parts of Odisha. Currently known as a perennially drought prone region, this region, except in some of the irrigated pockets, was recognised as an agriculturally prosperous region in the country, as recorded by documents prepared by the British regime. Like most parts of the central highlands, this region has been rich in its paddy cultivation culture. People here have nurtured a wide diversity of paddy varieties. Traditionally thus, Nuakhai is the most important festival for this region dominated by agrarian communities. 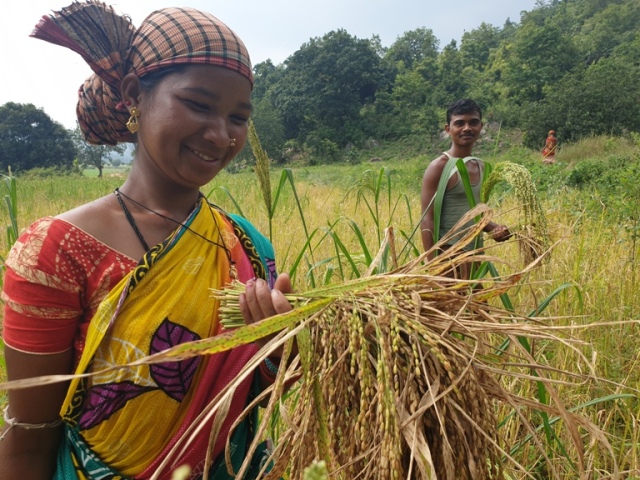 Nuakhai literally means ‘eating newly harvested rice. ’Traditionally, the harvest is first offered to the mother deity (Earth) as a mark of gratitude to her for giving us the food. For most of the indigenous communities, the local deity represents Mother Nature and to thank her for the harvest is important for them. People pray her to keep the farm lands fertile and production bountiful forever.

The festival, as has been told to me by village elders, is meant to celebrate the soil, its science that produces food for us and the ecology that keeps the soil healthy. It is also a festival to respect the farmer. A farmer is not necessarily the one who owns the land, but all those who are involved in the entire farming cycle starting from preparing the land for cultivation to harvesting the crop. That’s the reason even the landless labourers celebrate Nuakhai with great enthusiasm and fervour.

The festival teaches the importance of respecting family and village elders and promotes unity in community. That’s the reason many in the current generation recognise Nuakhai as “Nuakhai Bhetghat.”

Bhetghat literally means ‘get together’ and one can see a new culture of get together emerging in all places where people from western Odisha have migrated out for work, basically the settlers. However, many who can manage leaves from their work place to return back to their ancestral homes or villages prefer to join the celebration with their larger families.

A festival for all

For the migrant labourers, who have travelled to other states to work as wage earners, coming back home during Nuakhai is a must. Many often they spend a large chunk of their earning to come back and spend in the festivities. I have interacted with many such people, even the ones who have not migrated out but are poor, to find out that they have borrowed loan from money lenders to celebrate Nuakhai. No other festival drains out the family finances of these people as much as Nuakhai does. The celebration has to happen and the tradition has to be nurtured.

This year Nuakhai has certainly not been organised in the way it is traditionally done. While the worships in the temples have been done to continue with the rituals, restrictions due to COVID-19 have made it difficult for people to celebrate it with the vigour and colours they always do. For many migrant labourers, who have been forced to return to their homes much ahead of the time due to COVID-19, are without much money left with them. The celebration has been much more difficult for them. However, the spirit remains undeterred. People are celebrating but with caution.

Need to adapt to climate change

A pandemic this year is not the only woe that the people are facing. Climate change induced droughts, extreme precipitation events and increasing water scarcity have been some of the larger challenges the farmers of this region have been worried about for the last more than two decades.

While many of us celebrate Nuakhai rather symbolically, for the farmers and forest dwellers, it is of the utmost importance. They relate their lives and livelihoods with this festival. Unless we help them build their capacity to adapt to climate change, we may not be able to boast about this great culture in times to come. Let’s wake up fast! Nuakhai Juhar!!

The writer is Convenor, Water Initiatives. A known expert on water, sanitation and climate change in India with about three decades of experience.