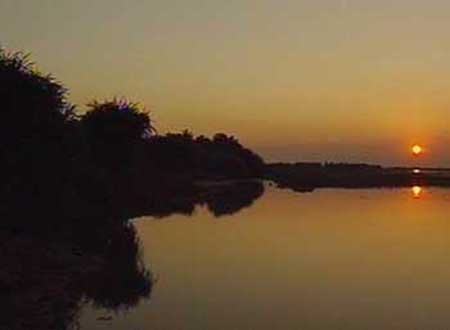 Odisha Channel Bureau Bhubaneswar, July 11: Odisha has lost nine square kliometres of mangroves during the two year period of 2011 and 2012 as per the forest survey assessment conducted by Forest Survey of India in 2013.Secretary of Wildlife Society of Orissa Biswajit Mohanty, the latest report released by the Government of India a few days ago has shocked forest lovers who were dismayed to see this steep decline of mangrove forests in the State. “It is believed that active prawn mafias backed by powerful local politicians have denuded mangroves for conversion into illegal shrimp farms.“Sadly, the growth trend has been reversed as the 2011 assessment had seen an addition of one square kilometer of mangroves during the period 2009 and 2010.Though the State contains a small patch of mangroves of 213 sq kms it is very rich ecologically being the most bio diverse in the entire country.The State has the distinction of being second highest mangrove diversity habitat in the world as compared to that of Papua New Guinea.Bhitarkanika has 62 species of mangroves and associates which are not seen in mangrove forests of other states, he pointed out in a statement on Friday.Kendrapada District which has Bhitarkanika National Park has the largest patch with 183 sq kms of mangroves.Bhadrak District has 21 sq kms followed by Jagatsinghpur (7 sq kms) and Balasore district (2 sq kms).Despite announcements by the state government that a massive mangrove plantation would be taken up post the Super cyclone in 1999, the State has miserably failed to conserve existing mangrove forests despite huge funding support from the World bank funded ICZM project and Central Government cyclone restoration funds.Mohanty further said that the survey also indicates severe breakdown of protection measures of the forest department.Odisha has the fourth largest forest cover among states of the country with 50,347 sq kms.The State has a very dense forest cover of 7,042 sq kms, moderate dense forest cover of 21,298 sq kms and open forest 22, 007 sq kms as per the latest assessment.Compared to the 2011 FSI assessment the state has added a net area of 1,444 sq kms of forest which is an increase of 0.93 per cent of forest cover during the last two years.It has added 1,530 sq kms of open forests, while losing 18 sq kms of dense forest cover and 68 sq kms of moderate dense forest cover. Open forests are mostly plantations or regenerating old forest growth areas which had been denuded.Due to large scale diversion of forest land for mining in Keonjhar and Sundargarh, the forest department has taken up plantations to compensate for such loss.However, it is far more important to protect existing natural forests which have rich ecological values, provide livelihood to tribals and are a treasure house of biodiversity.Due to failure of protection efforts both for mangroves and terrestrial forests as the state has lost very dense forest cover of 18 sq.kms and moderately dense forest cover of 68 sq kms over the last two years from existing natural forests which are home to myriad wildlife species including elephants, tigers, leopards, bears, etc.The addition of 1,530 sq.kms of open forest has been explained by Forest Survey of India as due to efforts of Vana Surakshya (VSS) groups, conservation efforts of by state forest department and availability of better satellite data.In our opinion, due to easy availability of cheap rice in the tribal districts of the state coupled with MNREGA work programs, the erstwhile tribal farmers have abandoned old podu or shifting cultivation areas in many tribal districts (Koraput, Rayagada, Malkangiri, Nabarangpur, Kalahandi, Nuapada, Boudh, Kandhamal, Gajapati) which has resulted in the increase in open forests of 1,530 sq.kms .Most of these farm fields located on hill slopes had significant root stock of sal and other trees which regenerate easily if left untouched for a couple of years.The very dense forests and moderately dense forests mostly in Mayurbhanj, Sundargarh and Kandhamal are directly under the control of the forest department which has miserably failed to protect them despite having huge budgets under the CAMPA scheme, JBIC and Plan funds worth nearly Rs.500 crores a year. Timber smugglers are active throughout the state and have been regularly decimating the dense forests of Satkosia, Keonjhar, Balliguda, Rayagada, Athmalik, Boudh, Simlipal, Baisapalli, Pallahara, Bonai, Dhenkanal areas.Sized illicit timber is regularly smuggled into the major urban centres of Bhubaneswar, Cuttack Angul, Sambalpur, Rourkela, Berhampur, Balasore , Bhadrak and Jharsuguda.Though forest laws have been made more stringent in 2003 with major amendments, the department is unable to check forest loss due to rampant corruption among the field staff that do not carry out raids or seizures, said Mohanty.