Inaugurating the facilities on virtual platform, Patnaik said the State would be launching many more grassroots programmes across all the districts. He also announced that a Synthetic-turf Hockey Training facility would be constructed in Chhatrapur.

Out of the three facilities launched today, the International Standard Multisport Indoor Stadium at Hinjilicut is spread over 1.5 acres of land with a seating capacity of 300. It has playing courts for Badminton, Volleyball and Basketball, besides facilities for Yoga, Gym and Physiotherapy.

The shooting range at Kalinga Stadium managed by Aditya Birla – Gagan Narang High Performance Centre will have a 22 lane 10-meter range and renovated 50-meter range. The range can cater to 60 athletes each day for training.

The Chief Minister said that as part of the 5T initiative, the state has a focus on complete transformation of sports sector in the State. We will continue to support sports persons in their endeavor to achieve excellence, he added.

Appreciating the vibrant sports culture of Ganjam, he said that Hinjilicut Indoor Stadium and Chhatrapur Indoor Hall have been created to further promote sports activities. Built to international standard, Hinjilicut indoor stadium is one of the best indoor facilities we have in the State, he added. 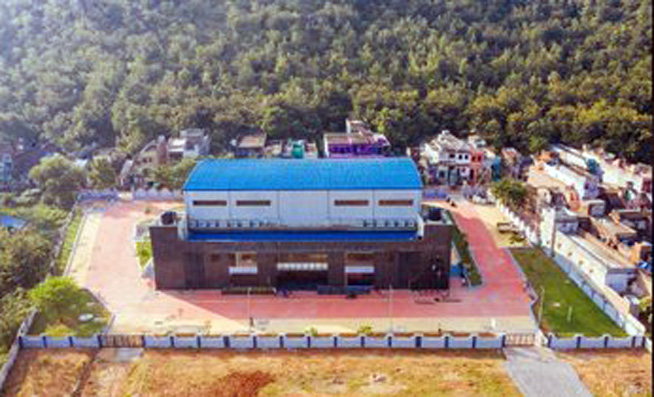 Patnaik further said that India has been a major force in Shooting at the global level. With the launching of the 10 metre and 50 metre shooting ranges in Kalinga Stadium, Odisha will also produce large number of shooting champions, he hoped.

He further said that Partnership of Industry and leading sports persons is a dynamic mechanism for flourishing sports.

Expressing his happiness over the partnership with Aditya Birla Group and Gagan Narang, Patnaik said that this has been further strengthened with launching of this facility. He thanked Kumar Mangalam Birla and Olympian Gagan Narang for their commitment to promote young talents in Odisha.

Speaking on the occasion, Sports Minister Tusharkanti Behera appreciated the leadership of Chief Minister for creation of powerful sports eco-system in the state. The endeavour of the State Government will succeed in finding innumerable rural talents and creating international standard sports persons.

Chairman of Aditya Birla Group Kumar Mangalam Birla said that the shooting high performance centre is a significant milestone for the shooting sport eco-system in Odisha and India as well. Thanking the Chief Minister for the visionary leadership, he said that Odisha has morphed to become the sports capital of India.

Olympian and Ace shooter Gagan Narang said that the opening of 10-meter range at the high performance centre is a massive milestone in infrastructure.

Speaking on the talent hunt programme in Odisha, Narang said that the State has more talents than what meets the eye.

The Sports Minister handed over the out-of-turn promotion order to Dutee Chand for receiving Arjun Award.

A video on sports infrastructure in Odisha was screened on the occasion. Secretary to Chief Minister (5-T) V.K. Pandian moderated the programme.