Santosh Patnaik
Visakhapatnam: The tenders for the first phase of North Andhra Sujala Sravanti, a long pending lift irrigation scheme to draw water from the River Godavari, will be called soon.

Chief Minister Y.S. Jagan Mohan Reddy said on Monday that out of project cost of Rs.15,000 crore, the first phase will involve an expenditure of Rs. 3,500 crore.

Though the project was promised over 10 years ago, it remained on paper due to various reasons. 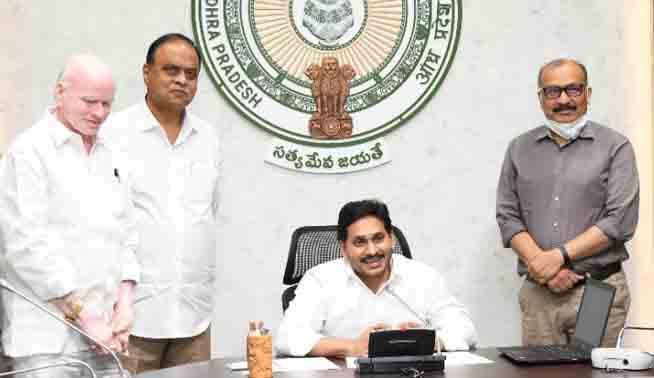 Reddy was speaking after laying the foundation stone through virtual mode from his camp office at Tadepalli for Somasila High-Level Canal Phase-2 and reiterated that irrigation was a priority sector for the government.

He said they would take up irrigation projects for a balanced regional development like the three-capital concept. He said Polavaram, national project declared by the NDA Government would be completed by kharif of 2022.

The Chief Minister said that the previous government proposed to spend Rs 527.53 crore on the Somasila project. “After forming the government, by going through reverse tendering about Rs 68 crore has been saved and we brought down the cost to Rs 459 crore. The project works are being done on a war-footing.”

The YSRCP Government has initiated a Rayalaseema Drought Mitigation Project with Rs. 40,000 crore.

The Chief Minister said tenders for YSR Palanadu Karuvu Nivarana (Drought Mitigation) project along with Chintalapudi lift irrigation and two other schemes would be notified soon.