This is the first Internet of Things (IoT) based project, brought for the safety of women traveling by autos and cabs.
Santosh Patnaik
Vijayawada: Andhra Pradesh on Monday launched Abhayam App for safe travel of women passengers in autos and taxis.

The app aims at providing emergency help to those in distress and instill confidence among women.

AP is ranked sixth in incidence of sexual offences and harassment cases against women, according to National Crime Records Bureau. As many as 17,746 cases were reported in 2019 as against 16,348 in 2018. 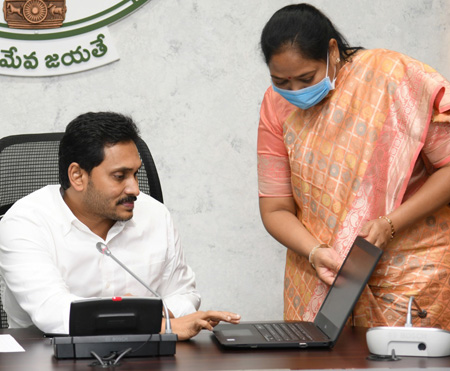 Launching the app at Tadepalli near here Chief Minister Y.S. Jagan Mohan Reddy said the YSRCP Government was taking many steps to stand up for women empowerment, including their safety and security.

This is the first Internet of Things (IoT) based project, brought for the safety of women traveling by autos and cabs.

The CM asserted that the ambitious project was brought not due to lack of trust on auto and taxi drivers but to build confidence on the drivers among women passengers.

“Not just corporate companies like Ola and Uber offer safe travel, even our local autos and taxis can offer much safer transport, where women needn’t fear to board these vehicles,” he said.

The CM said that the project aims to bring one lakh autos under the Abhayam initiative, where 5,000 vehicles will be equipped with tracking and IoT devices. One lakh vehicles will be brought under this in a year.

Initially, IoT devices were set up in 1,000 autos in Visakhapatnam as a pilot project. It will be introduced in Vijayawada and Tirupati later.

Those traveling by autos will need to download the Abhayam app on their mobile. The QR code affixed to the vehicle must be scanned before boarding the vehicle. With this, the driver’s photo and vehicle details will come to the mobile.

If women using a smartphone encounter difficulty in their journey, they can send the relevant vehicle number to the police from the mobile app and the whereabouts of the vehicle can be tracked through GPS.

Passengers who do not have a smartphone press the panic button on the IoT device attached to the vehicle and the information is sent to the Command Control Center. This lead the cab or auto to stop immediately and alert the nearest police station.

Reiterating that the State Government is giving top priority to law and order, safety and security of women, Reddy said that there should be no compromise on the protection and safety of women.

To ensure women’s safety to the fullest, the government established special police stations in every district and are taking steps to set up special courts and bringing Mahila Police Mitras in every village. The police brought Disha App, which is being used by all sections of the society especially women, on similar lines.