Uncertainty over repatriation of crew stuck in Bangla ship continues

Santosh Patnaik
Visakhapatnam: The 15-member crew of Bangladeshi cargo ship m.v. Maa which ran aground near a seafront park in Visakhapatnam on October 13 kept their fingers crossed with efforts still continuing by the agents for the ship owners and the London-headquartered International Transport Workers’ Federation (ITF) trying to expedite the process for their repatriation.

Navship Marine Services Pvt. Ltd, the agents for the ship, said the investigation of the all the crew completed on Wednesday with the local officials of Mercantile Marine Department (MMD) finishing the process for gathering information from the crew stranded on-board the ship on the probable reasons for running aground. 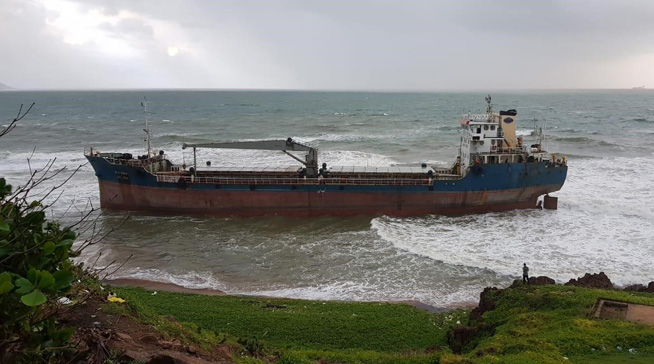 The ship, which has gross registered tonnage of 1599, had lost one of its two anchors while at anchorage at Visakhapatnam Port on October 13 under the influence of heavy winds triggered by a cyclone. It was scheduled for berthing on October 14 by loading fly ash for delivery at Mongla Port in Bangladesh.

The MMD officials after obtaining no objection certificate will submit it to the Principal Officer, Chennai for repatriation of the stranded crew. “We are in touch with the ship owners, their agents and the authorities concerned for early repatriation of the crew,” said ITF Inspector B.V. Ratnam.

As per Marine Labour Convention, 2006, in the event of owners abandoning a ship, the company which insured the ship, has to pay salaries for two months and arrange repatriation of the crew.

Bhupesh Malaratua, chairman & managing director of Navship Marine Services Pvt. Ltd, the agents for the owners, told Odisha Channel that they had successfully prevented any threat of oil spillage with the support of the all the authorities.

After running aground, the first and foremost thing was to remove all the fuels from the vessel and the owner’s PNI Insurance Club appointed M/s Gill Marine, a company based from Vizag to remove all the oils from the vessel. They were awarded the contract on October 14. They mobilised all their equipment, men and power and started the removal of oil from October 15 and completed the job on November 14.

The same was inspected by the Indian Coast Guard and Indian Navy, and they have ruled out the possibility of oil spillage.

Bhupesh said the total quantity of fuel removed from m.v. Maa was close to 1,49,000 litres.

In a letter to District Collector V. Vinay Chand, the agents, said “subsequently the owners were negotiating with the salvage team for refloating of the vessel, and finally the owners had appointed a reputed salvage team US-based Resolve Marine. Its men from Mumbai and Singapore rushed to Vizag Port on October 31 for arranging all the preparations to re-float the ship on November 14 coinciding with Diwali at 7.30 p.m. on high peak water tide.

Bhupesh said they had loaded all their technical equipment, men and power on November 2 and they were preparing for the salvage operations which was tentatively scheduled for November.

Before the commencement of the salvage operations, Bhupesh said they had a meeting on November 11 with the Vizag Port’s Deputy Conservator (Marine Department) Capt. I. Srinivas, along with the Coast Guard, P&I representative, agents and the salvage company representative had submitted the salvage report and the plan of action.

The plan of action by the salvage company was to refloat the vessel on November 14 at 7.38 pm and handover the tow line to the Vizag Port authorities and then bring the vessel by using the port tugs at berth at Hindustan Shipyard jetty for dry docking on November 18.

Bhupesh said that they were instructed by the Deputy Conservator, VPT to get an official confirmation letter from Hindustan Shipyard Ltd accepting the docking of the vessel at HSL Jetty. The same letter was submitted on November 12.

The Deputy Conservator later advised the ship owners to get clearance from Indian Register of shipping and give an undertaking for entry inside the Vizag Port.

“We had approached the IRS and requested them for inspection at the current location. But unfortunately, they refused to attend the survey on her (m.v. Maa) present position because as per their by-laws they have to carry out the inspection once the vessel is re- floated,” Bhupesh said.

Refusal to allow entry into the Vizag Port area led the owners to communicate to the port the notice of abandonment through the agencies concerned on November 12 on receipt of information from their Vizag-based agents.