Speaking on the occasion, the Chief Minister said that the government had taken up the responsibility of supporting the farmers during their hours of distress. 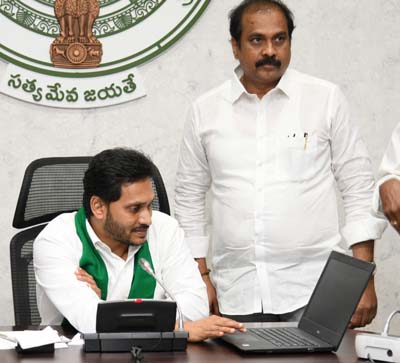 The free crop insurance scheme, without levying any burden of premium on farmers, has been hailed by various farmers’ organizations. During the erstwhile Telugu Desam Party Government, for availing insurance scheme, the farmers had to pay their share, while both State and Central governments were paying an even share of premium amount. However, neither the State nor the Centre used to pursue the insurance claims resulting in farmers either receiving the insurance amount after a very long time or end up losing the insurance.

In order to resolve this, the YSRCP Government has taken up the issue to benefit farmers and process the claims in fast-track mode, besides paying the entire premium on behalf of farmers.

While only about 20 lakh farmers were enrolled for insurance coverage during the TDP regime, in the present government about 49.80 lakh farmers have been brought under the insurance cover, where the State Government took up the responsibility by paying Rs l.971 crore towards premium during 2019-20, the Chief Minister said.

“In our government during 2019-20, about 49.80 lakh farmers were brought under insurance coverage,” said the Chief Minister adding that 45.96 lakh hectares of land was covered with insurance. With regard to the Nivar Cyclone, the Chief Minister said that once the crop loss enumeration was done, the details would be displayed at Rythu Bharosa Kendras (RBKs) along with village secretariats. The compensation would be paid by December 31, he declared.

The Chief Minister said the crop loss during 2020 would be paid in April without any delay, after Planning Department submits the report. The government is also purchasing germinated and decoloured crops at a graded MSP to ensure that no farmer suffers financially.