He said empowerment of weaker sections socially, economically, and politically had been taken up as a movement and nowhere in the country such emancipation had taken place.

Speaking at the BC Sankranti Sabha held here, where chairpersons and directors of 56 BC Corporations were sworn in, he said that Sankranti had set in early with the festival atmosphere and told the newly sown-in chairpersons that the position held by them was a responsibility and not power.

They should try to uplift those persons who were left out and be part of the welfare programmes. 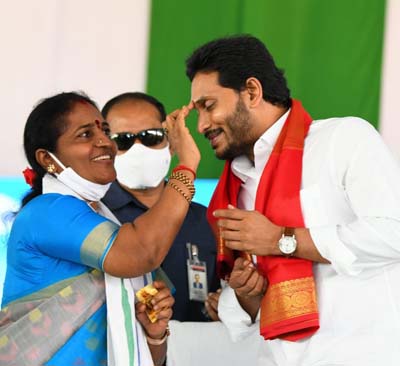 The Chief Minister said, setting up 56 BC Corporations and appointing 728 BC leaders, from 139 castes, in the posts of directors and chairpersons was historic, which was initiated by only AP Government and urged the leaders to take responsibility for ensuring welfare schemes for all the eligible beneficiaries.

“I am happy to note that 29 of the 56 chairpersons and 336 of the 672 directors are women. Like no other government, Andhra Pradesh has made laws in implementing 50 percent reservation for BC, SC, ST and minorities and women in all nominated posts and contracts. Standing by this, during the composition of the State Cabinet, 60 percent posts were given to BC, SC, ST, and minority leaders, and sent two BC leaders to Rajya Sabha,” he said.

The Chief Minister said that the previous TDP government had betrayed BCs and broke their backs while YSRCP Government was treating them as Backbone Classes.