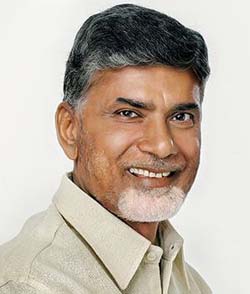 Charging Reddy with indulging in insider trading to do realty business by deciding shift capital to Visakhapatnam, he said they would continue ‘Save Amaravati’ stir with more aggression in future.

He was addressing a huge congregation of protesters at Rayapudi village in the capital region to mark completion of one year of agitation spearheaded by Amaravati Parirakshana Joint Action Committee.

The Joint Action Committee has been agitating to protest the decision to set up legislative capital at Amaravati, executive capital at Visakhapatnam and judicial capital at Kurnool.

Refuting the charge that he indulged in insider trading in forming capital at Amaravati, Naidu said instead Reddy and his coterie had bought thousands of acres in Visakhapatnam before decision on trifurcation of capital with an ulterior motive.
Farmers of 29 villages which fall in the capital region have been demanding strict adhering to one State-one capital norm.

The TDP leader said Amaravati would have become a world-class capital with Singapore promising to develop it.

Naidu had acquired 33,000 acres of highly fertile lands from the farmers under Land Pooling Scheme promising them allotment of 1,000 square yards of developed plot for each acre surrendered for developing what he claimed ‘people’s capital.’

He also rubbished the claim that construction in riverside area of Amaravati was very expensive and said it was in fact less expensive than Reddy’s house Lotus Pond in Hyderabad and mansion in Bengaluru.