Odisha Channel Bureau
Bhubaneswar: A three-day-long virtual Janta parliament has demanded repeal of the three farm laws that have triggered protests from farmers in different corners of the country.

The event in Delhi, which saw participation of representatives of 70 organisations from different parts of the country, called for a special and comprehensive session of the Parliament to debate and deliberate on the agrarian crisis and the plight of farmers. 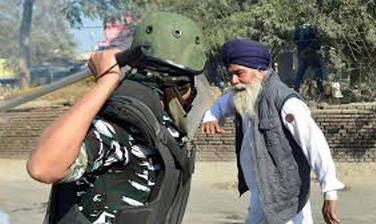 The special session of Parliament should ensure provisioning to all section of farmers, increased credit along with the strengthening cooperative banks, agricultural credit societies etc, including the passage of Freedom from Debt Bill and Bill for Fair and Remunerative Prices. The inclusion and accessibility of women at every stage in the above demands, should be brought centre stage, the Janta parliament said in its resolution that was passed on Monday.

The participants of the three-day event resolved to urge the Centre for waiver of all debts of farmers, expansion of MSP to all crops and guaranteed as a legal right, decentralised procurement and a Universal PDS with the inclusion of pulses, millets and cooking oil according to ICMR guidelines.

Speaking on the issue, eminent journalist P. Sainath said that the three days Janta parliament was absolutely phenomenal and exhilarating. Speaking about the way forward, he urged every section of society to extend their support and solidarity to the farmers’ movement by forming local committees and initiating a people’s movement to save famers and save the nation.

Meera Sanghamitra, National Alliance with People’s Movement while presenting the resolution emphasised that the three farm laws and the electricity amendment bill should be repealed.

Demanding repeal of the three farm laws, Aruna Roy, MKSS said that, “We need to stand with the farmers to demand the repealing of these laws and create a new agricultural policy framework drawn up in full consultation with the farmers.”

Usha Ramanathan, Legal Scholar and Researcher on Jurisprudence of Law who chaired the Session titled “Violation of Constitution and People’s Struggle”, said that the decisions of the state government like this farm law is against decentralisation.

“The subject of agriculture is written in the state list, but the central government imposed the first ordinance and then the law on this subject. The finance minister recently said that privatisation is the only method of economic reform. The central government is talking about disinvestment, but is all the resources in the hands of the Centre? Government is not making law for people but imposing law. RTI & MNREGA was created in consultation with people. Government has ended pre-legislative consultation. The new laws force people; they are going against people’s opinion and consent,” said Ramanathan.

Speaking about the changing policies of government, M.G. Devasahayam, former Chief Secretary, Government of Haryana and Chairperson People First, stated, “Government is only working for the ruling and upper class. The biggest stigma on democracy is clearly written in the policies and schemes of NITI Aayog. India looks less like a democracy and more like an oligarchy.

Taking this forward, Vidya Sagar Giri, Secretary, All India Trade Union Congress said that the ‘PM vociferously attacked labor laws and guarantee in the beginning of his 2014 tenure. Now we see the result of his views in the dilution of more than 40 labour laws. The government through the Parliament has repealed so many laws to do with the protection of common people, the workers and labourers etc. Historically, people have struggled for these laws- for their protection and welfare. And the government is rapidly repealing them today.”

Expressing concern about OBC, Dalit and Adivasi communities, Sagari Ramdas, Veterinary Scientist with Food Sovereignty Alliance pointed out that these communities whose livelihoods are totally linked with raising sheep and goat have suffered most. In the farm laws they took out dairy and milk way from the essential commodities act way back in1992 but in the other two laws the farmers’ produce is very clearly defined as also including the products of goatery, poultry, piggery and dairy, fodder etc. and this has deep relevance.