Odisha Channel Bureau
Bhubaneswar: Ten months after Odisha reported the first COVID-19 case, the vaccination drive against the disease started at as many as 161 stations spread across the State on Saturday.

A student who returned to Bhubaneswar from Italy had tested positive for COVID-19 as the first reported case in Odisha on March 15 last year. 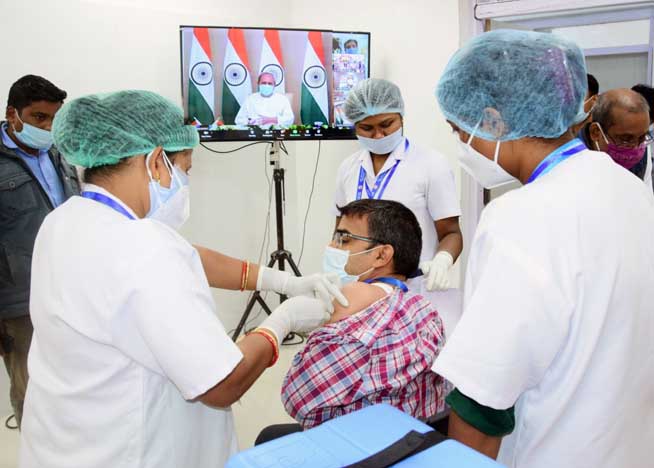 The drive against COVID-19 began when a 51-year-old sanitation worker was administered the first COVID-19 vaccine at the Capital hospital in Bhubaneswar. He received a Covaxin jab.

The director of the hospital and a senior doctor also took the vaccine in order to dispel doubts in the minds of people.

Senior State government officials expressed satisfaction that the vaccination drive started in Odisha soon after the drive was launched across the country by Prime Minister Narendra Modi.

Mohapatra informed the media that a decision has been taken to observe the after-effects of the vaccines on the health workers for one day.

The vaccination will resume in the State from Monday, Mohapatra said, while adding that efforts were on to cover 3.28 lakh health workers under the vaccination programme by January 25.

Patnaik congratulated the health workers and appealed for their cooperation in the vaccination drive.

Commending the CovidWarriors, the Chief Minister said that the State is proud of their dedication and sacrifices over the last 10 months in the line of duty.

“Odisha Government has made all necessary arrangements for vaccination in 161 sites across all 30 districts,” said Patnaik.