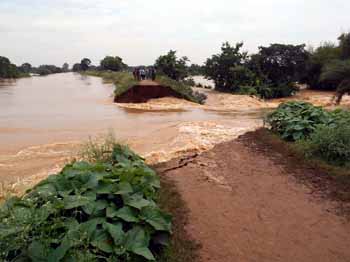 Rajashree DashJajpur, July 23: Around 15000 people have been marooned after the Baitarani river breached its embankment in Odisha’s Jajpur district following high flood in the river.Around 6000 people have been evacuated and moved to safer places following the flood.The flood waters submerged homes in at least 12 villages.The flood waters have also inundated thousand hectares of crop fields located in low-lying areas, official sources said.According to official reports, as many as 15000 people of at least 12 villages of four gram panchayats under Dasarathapur block in the district have been inundated following a 100-feet breach in Baitarani right embankment at Patapur in the Jajpur district on Tuesday.The flood affected people of Dasarathapur, Tarapada, Kaspa and Sanchina gram panchayats have been moved to cyclone shelters, schools, Kanyashrams and other places.The flood waters entered into many villages resulting thousands of hectares of crop land submerged, said officials sources.“We have rescued around 6000 people and rehabilitated them in various shelters.Free kitchen services have been arranged for the rehabilitated flood victims,” Said Anil Kumar Samal, collector of Jajpur.A family having seven to eight members in Patapur village who are still amid the flood water could not be rescued by this evening.Because the roof of the house upon which they have taken the shelter is situated in front of the breach.So that the current of the flood water is so high no bower boat or rescue team can reach the stranded people.Efforts are on to rescue the stranded on roof top.“A chopper has been requisitioned for the rescue of the stranded people.As soon as it is available, we will press it into service for their rescue,” said Samal.The district administration has also requisitioned more power boats from other organization with separate man power to engage them in rescue and relief operation.The teams are under way and they will reach to us by this night,” he said.Meanwhile, the flood water in the Baitarani river has started receding.But, the river is still flowing above the danger mark in both Akhuapada and Ballavi ghat in the district, officials said.The district administration has directed the veterinary department to arrange fodder for the starving cattle in the flood hit areas.A team of district level officers led by Additional District Magistrate S.Mishra are camping in the flood hit areas and monitoring the situation.Jajpur collector visited the flood affected areas on Tuesday afternoon.