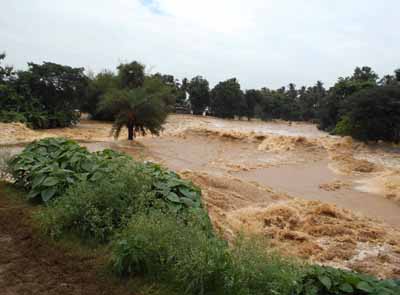 Rajashree DashJajpur, July 23: Although water level in Baitarani river receded on Wednesday, the flood situation in Odisha’s Jajpur district remained grim on Wednesday.About 15,000 people of Dasarathapur block of the district have been cut off from the mainstream following a 100 feet breach in the river of its right embankment near Patapur on Tuesday.The mighty Baitarani is still flowing above the danger level on Wednesday evening, according to official sources.Baitarani is flowing at 17.87 metres near Akhuapada against its danger mark 17.83 metres while the river flowing at 10.58 metres near Dasarathapur against its danger mark is 9.52 metres.The breach in Baitarani river on Tuesday morning that caused high flood has totally damaged hundreds of thatched houses.All household articles and food stuff have been washed away following the flood water.Though the flood victims have rushed to safer place along with their members to save themselves from being washed away by the flood, they are yet passing their day and night without food.The flood victims are in a pitiable condition without food and other essential supply even after two days passed since the high flood struck them.Many people have taken shelters on high land or river embankment along with family members without food.“My entire family is without food and water since Tuesday morning after flood water gushed into our house following the breach near our village.I rushed to a high land along with my five member family to save our lives.We expected the government help.But, it has not so far reached to us,” said Sudarsan Jena of Patapur.District official sources said that about 78000 people of 47 villages under 16 gram panchayats of Dasarathapur block in the district have been affected due to the flood out of which 40,000 people are marooned.Road link to head quarters town and Mangalpur has been cut as the road is under 4-5 feet high flood water since Tuesday.Around 6,000 people were evacuated and moved to safer places and they have been provided with cooked food.District administration claimed to have provided 100 quintal flattened rice and 8 quintal gur as relief to the marooned people.But, the relief is yet to be reached the starved people, alleged many flood victims.Besides, thousands of cattle herd are also starved following the flood.