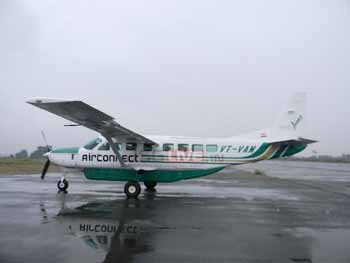 Odisha Channel Bureau Bhubaneswar, July 30: Odisha Government on Wednesday signed a memorandum of understanding (MoU) with the Airport Authority of India to establish the second airport in the State at Jharsuguda.“The establishment of Jharsuguda Airport has great strategic significance for the government.Jharsuguda has marked concentration of industries and urban population because of its proximity to valuable natural resources,” said Chief Minister Naveen Patnaik.“I am sure in times to come Jharsuguda Airport will acquire a key position in the aviation map of the country paving the way to faster development of the State and the nation as a whole,” Patnaik added.The MoU was signed by AAI chairman Alok Sinha and special secretary of the state General Administration department Nitin Chandra in the presence of the Chief Minister.Jharsuguda Airport, the second airport in the State belongs to AAI, is not in operation.Only Air Traffic Control Tower is functional and charter aircrafts are being operated.As per preliminary estimate of AAI, the cost of the project is Rs.210 crores.Odisha Government will provide financial assistance of Rs.75 crores to AAI for the project.AAI will develop the airport for full-fledged operations of A-320 aircraft within a period of two years from the date of which the physical possession of land for Phase-I is handed over along with funds of Rs.75 crores for the project, according to official sources.