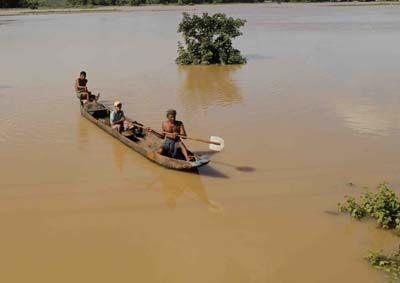 Rajashree DashJajpur, Aug 5: Flood situation in Jajpur remained grim on Tuesday with mighty Baitarani river is still in spate and flowing much above the danger level and flood waters causing havoc in Dasarathapur, Korei and Jajpur blocks of the district.More than one lakh people in the three blocks of Jajpur district have been affected by the flood caused due to heavy rains under the influence of the cyclone formed over the Bay of Bengal.Dasarathapur block, which was worst hit by the Baitarani flood last month, experienced floods again after flood water gushed into the area through the breach that was under repair.At least 40,000 people of 20 villages in six panchayats under Dasarathapur block have been marooned flood water of Baitarani following a breach in the embankment at Patapur on Monday night.Around 6000 people of both Dasarathapur and Jajpur blocks have been evacuated to schools and panchayat offices.Cooked food is being served to the flood victims who have taken shelters in the schools and panchayat offices, an official said.Besides, 11 gram panchayats of Jajpur and Korei blocks have been marooned due to the flood in Baitarani and its branch river Budha river.More areas were likely to be flooded in the district as water level in Baitarani was on the rise.“The flood situation in the district is grim.The mighty Baitarani is flowing above 2.5 metre of its danger level at Akhuapada and it is rising.If the rising trend continues, more areas in the district are likely to be flooded,” said Anil Kumar Samal, District Collector of Jajpur.Another fresh breach was caused at Trilochanpur under Jajpur block in the right embankment of Budha river, branch of Baitarani on Tuesday afternoon.As a result flood water entered four panchayats of Jajpur block and marooned over 10,000 people.