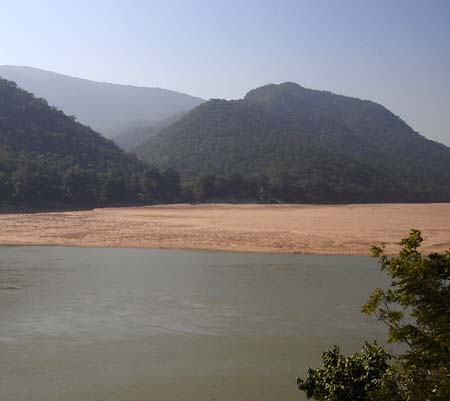 Odisha Channel Bureau Angul, Aug 6: Around 2000 people of Tikarpada area in Satkosia forest region in Odisha’s Angul district who are already encircled by Mahanadi water are in a state of fear due to more flood water coming on the river on Wednesday night.However, all the wild animals in Satkosia wildlife sanctuary are safe in the current flood in the area caused by swelling Mahanadi by 22 feet high, claims the divisional forest officer SMT Rahman.In the current flood, Tikarpada village, having population of about 400, has been inundated while four other villages were encircled by the river water of Mahanadi.Most of the villagers of Tikarpada are daily wage earners.People complained of government negligence in reaching relief to them even they spent two days without food and water.“WE are totally ignored by the local government officials in getting food and others even our village has been inundated by Mahanadi water.Some officials came yesterday, they provided some relief to another village people leaving us in lurch,” said Subash Pradhan of village Tikarpada.Angul District Collector Sachin Ramachandra Jaddav has rejected their charge saying that “the real affected have been provided relief there.Angul block development officer is camping in Tikarpada region to supervise the distribution of relief among the affected people we are also keeping strong vigil for the possible rise in water level this night and are ready to meet any eventuality.”