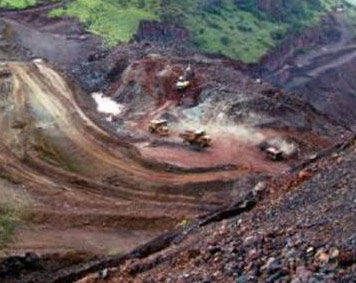 Odisha Channel Bureau New Delhi, Aug 8: Odisha Jana Adhikar Parishad, a civil society forum working on mining issues in Odisha has submitted memorandum to Union Steel and Mines Minister Narendra Singh Tomar demanding CBI Inquiry into irregularities and illegalities of mining operation in the State following the recommendation of Justice M.B.Shah Commission.The memorandum was submitted in the national Capital by a five-member team led by president of the Parishad Bijay Parida on Thursday.The Minister after hearing details of mining scam of Odisha assured the team to look into the matter and ensure CBI inquiry after consulting with Prime Minister Narendra Modi.The other members of the delegation were human rights activists Pradip Pradhan, Jyoti Ranjan Mohapatra and Arun Jena.They also submitted memorandum to Union Tribal Affairs Minister Jual Oram, Union Home Minister Rajnath Singh, and Union Minister of State for Petroleum and Natural Gas Dharmendra Pradhan and urged them to appraise the Prime Minster about the immediate need for CBI inquiry as per Shah Commission recommendation in the greater interest of tribal people of Odisha. The team of activists also met and appraised leaders of different political parties such as Janata Dal (United) president Sharad Yadav, senior CPI leader D.Raja, and senior CPI(M) leader Mohammed Salim about the findings of Shah Commission and appealed them to raise the issue in Parliament and mount pressure on the Bharatiya Janata Party-led NDA government for a CBI probe into the illegal scam.The activists pointed out that the Shah Commission had mentioned in its report: “Due to illegal mining and mining mafia, law has been made helpless because of its systematic non implementation.It has led many people in this country to believe that disregard of law pays and that the consequences of such disregard will never be visited upon them – particularly, if they are men with means and deceitful skill to pollute and spoil the administration.”The organisation has also criticised the previous Congress-led UPA-2 government for its ominous silence and gross failure to order for CBI inquiry into mining scam, though it tabled the Commission report along with Action Taken Report in Parliament in February 2014.The organisation is also planning to organise a demonstration before Parliament during the winter session in support of their demand for CBI Inquiry into mining scam, if the Central Government fails to order CBI probe into the scam at the earliest.