Odisha Channel Bureau Cuttack, Aug 8: A three-day literary festival organised by KROTOVA, the literary and debating committee of the National Law University, Odisha was inaugurated by Odisha Governor S.C Jamir on Thursday.Reputed academician and writer Pushpesh Pant was the guest of honour at the inaugural session.Jamir said he was delighted to be part of the literary festival which he felt was a ‘noble’ conception by the university.He stressed that literature was a medium to express the country’s status, and that holistic literary development was crucial for society and counted Pandit Jawaharlal Nehru, Gopal Krishna Gokhale and Odisha’s Utkal Gaurav Madhusudhan Das among those in the legal fraternity who contributed richly to the shape of modern Indian literature. 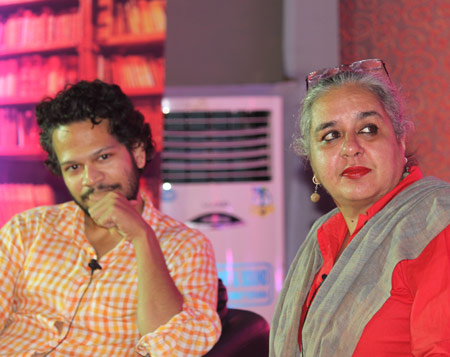 Creative writers are imperative for a society to keep moving forward, and that although science and technology may give practical benefits, it is literature and art that gives us eternal happiness and makes life suppliant and meaningful, Jamir added.Pant spoke about his special relationship with Odisha – terming it his ‘love affair’ with the state that he called ‘The Land of Govindas’ owing to his many impressionable childhood memories spent in Konark and Puri.Acting vice-chancellor of NLUO Priyambada Mohanty Hejmadi traced out the symbiotic nature of literature and law, and called literary awareness an important tool for analysing events, people and life itself.Hejmadi reiterated that an enhancement of literary sensibilities was crucial for an intellectually vibrant atmosphere, and said that the event was adding another feather in the University’s cap of rapidly growing accolades and achievements in the academic and co-curricular spheres.In her welcome address, Assistant Professor of English Manisha Mishra, who is the faculty advisor to KROTOVA outlined that the main aim behind organising such a literary festival was to foster the love of reading and writing, apart from aiming for the holistic development of students.Pant’s discussion in the afternoon on ‘Food: An important aspect of Literature and Culture’ proved to be the perfect opener to the festival, wherein he focused on various aspects of food beginning from the historical aspect of food, going on to liken food as a form of art to music; he also questioned the aspect of food and globalisation, how food may impact and even manipulate your moods, and that food at certain points in time, may even incline towards representing a certain sense of reverie.Following a discussion as engaging as Pant’s, evening witnessed a few literary events such as flash fiction writing and literary quizzes as bibliophiles thronged to the bookstores set up at NLUO.Mythology has always been a topic dear to most, and witness to this was the eager participation of everyone present at the discussion between Arshia Sattar and Chandrahaas Choudhury on ‘Why Mythology makes the best source for Literature’.While Choudhury provided Sattar a constant barrage of questions, she continuously shone through with her detailed, thorough and elaborate answers.Writers and academicians of repute like Arshia Sattar, Vartika Nanda, Athena Kashyap, Altaf Tyrewala, Kalyani Samantray, Dinanath Pathy and Chandrahaas Choudhury were attending the event.