Odisha Channel Bureau Bhubaneswar, Aug 23: A large group of Bharatiya Janata Party workers on Saturday joined hands with residents of Ghangapatna area on the outskirts of the city against the encroachment of over 100 acres of forest land by many people, including some senior leaders of the ruling Biju Janata Dal headed by Chief Minister Naveen Patnaik.The agitated villagers and BJP workers damaged the road illegally built on village forest category land to as an approach link to the land that had been encroached upon in violation of rules.They also damaged the boundary wall around the land that had been illegally encroached upon by forging records and providing wrong information and obtaining patta by fraudulent means.The villagers demanded that the land scam should be investigated by the CBI and the culprits should be taken to task as per the law. 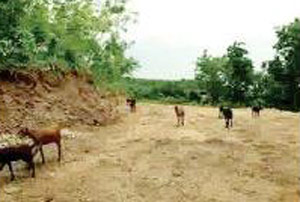 State Government had on Friday ordered a joint verification by the Revenue Department and Department of Forest and Environment to conduct an on the spot inquiry to find out which category of government land had been misused or encroached upon by others.Rural Development Minister Badrinarayan Patra has already clarified that his Department was not involved in the construction of road in question at Ghangapatna village.Government had ordered for a joint verification two days after senior BJP leader Bijoy Mohapatra alleged that over 100 acre of forest land had been illegally encroached by two BJD leaders – a Minister and a Rajya Sabha Member – at Ghangapatna under Chandaka tehsil.Sources say that some influential Bureau crats had also obtained land in the locality where encroachment of government land had come to light.Meanwhile, Odisha BJP announced to stage a dharna outside Raj Bhavan here on August 26 and submit a memorandum to Governor S.C.Jamir demanding a CBI probe into the land scam.