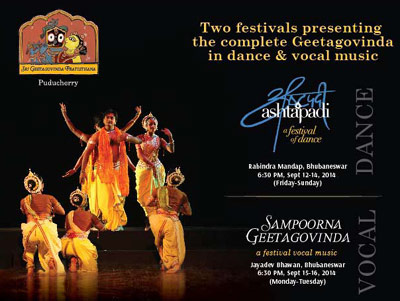 Odisha Channel Bureau Bhubaneswar, Sep 11: Sri Geetagovinda Pratisthana, a non-profit charitable trust registered at Puducherry is presenting two festivals – Ashtapadi and Sampoorna Geetagovinda – at Bhubaneswar from September 12 to 16.The back to back complementary festivals of performing arts feature Odissi dance recitals and vocal renditions of all twenty four songs of Jayadeva’s Geetagovinda in solo, duet and group formats in new choreography and music composition in celebration of devarpan and lokarpan of Odia book ‘Sampoorna Geetagovinda’ by Subas Pani.Odisha Chief Minister Naveen Patnaik will release the book at the book release function which will be held at 6:30 pm at Rabindra Mandap on Friday.It will be followed by the Ashtapadi Festival.Minister for Tourism and Culture Ashok Chandra Panda will inaugurate the Sampoorna Geetagovinda Festival at Jayadev Bhavan at 6:30 pm September 15.The Odia book ‘Sampoorna Geetagovinda’ provides a critical edition of authentic text of Jayadeva’s Geetagovinda with variant readings, anvaya, word by word meanings and a prose translation along with a comprehensive introduction and includes complete musical notations of all songs and slokas.Renowned Odissi Guru late Gangadhar Pradhan and senior dancer-choreographers Aruna Mohanty, Sharmila Biswas and Meera Das, in creative collaboration with Pani, have choreographed all the 24 songs in Odissi dance in solo, duet and group formats for Ashtapadi, a festival of dance.The new choreography in Odissi is based on adaptation of the original music composition of Pani for ‘Sampoorna Geetagovinda’, a set of five audio CDs released by SAREGAMA in 2008.Pani has composed music for the set.The dance performances will see participation of senior artistes Aruna Mohanty, Sharmila Biswas and Meera Das and dancers from the repertory of Orissa Dance Academy and Odissi Vision and Movement Centre.Geetagovinda Pratisthana has earlier presented this choreography at Delhi in two editions of Ashtapadi in 2010 and in 2011.Pani has conceived and curated this unique festival that showcased dance interpretation of Geetagovinda in other classical forms in its third edition in 2013.The Sampoorna Geetagovinda Festival will be the first ever stage performance in vocal rendition of all 24 prabandhas, geetas or songs of Geetagovinda in entirety covering all the padas or stanzas.This will follow the music composition of Pani for ‘Sampoorna Geetagovinda’.Four senior Odissi Gurus will present these songs with their students and colleagues, specially trained for this festival.The two-day festival will have four sessions, two each evening and each session of approximately one hour will feature six songs in vocal music.Geetagovinda Prtisthana is collaborating with Utkal University of Culture, Utkal Sangeet Mahavidyalaya and Guru Kelu Charan Mahapatra Odissi Research Centre to present this unique festival.Odissi Sangeeta Guru Sukanta Kumar Kundu, Guru Keshab Rout, Guru Bijaya Kumar Jena and Guru Sangeeta Gosain will present six songs each with their students and other artistes in solo, duet and group formats.The festival will feature gurus along with senior, experienced, young and a few very young artistes.Geetagovinda Pratisthana hopes to provide a complete aesthetic experience of Geetagovinda in performing arts through this unique and first of its kind cultural event in the country.