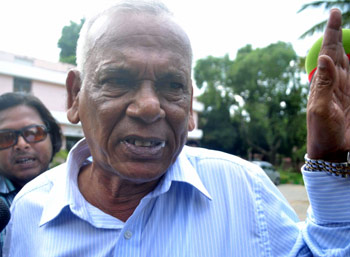 Odisha Channel Bureau Bhubaneswar, Sep 24: Taking thousands of the litigants by surprise, lawyers of Orissa High Court started a two-day cease-work agitation on Wednesday to register their protest against the manner in which former Advocate General (AG) of Odisha Ashok Mohanty was arrested by the Central Bureau of Investigation for his alleged involvement in the chit fund scam.The agitating lawyers maintained that the CBI did not follow the right procedures while arresting Mohanty for the alleged misuse of his as Advocate General with regard to purchase of a house from Pradip Sethy, head of chit fund firm Artha Tatwa Group in Cuttack.Orissa High Court Bar Association that is spearheading the protest has appealed the lawyers associations in the subordinate courts across the State to abstain from work for a day on Thursday.The High Court lawyers will decide about their future course of action on Friday.Odisha State Bar Council had on Tuesday condemned the arrest of Mohanty and announced that they will move the appropriate court challenging the arrest.Mohanty was arrested on September 22 following his questioning by the CBI on September 13.Mohanty was questioned a day after he relinquished office as Advocate General of the State Odisha as soon as the State Government accepted his resignation that he had tendered on May 17 this year.