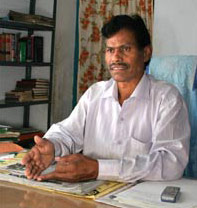 Odisha Channel Bureau Bhubaneswar, Sep 29: Prominent tribal leader of Kandhamal district Lambodar Kanhar joined the Bharatiya Janata Party here on Monday.Kanhar is heading the Kui Samaj Samanwaya Samiti (KSSS), an organisation working for the Kui language speaking Kondh tribal community in Kandhamal, Kanhar joined the BJP along with many of his supporters at the party’s State headquarters in the Capital city.He had earned popularity as a young tribal activist by leading the anti-Dalit agitation against exploitation of Kondhs in Kandhamal in the early Nineties.He was supporting the ruling Biju Janata Dal during the past few years.BJP State president K.V.Singh Deo and many senior leaders of the BJP welcomed Kanhar and his associates and supporters into the party fold.They expressed hope that Kanhar’s joining the BJP ahead of the October 15 by-poll in Kandhamal Lok Sabha constituency will brighten the prospects of the party.Many office-bearers of KSSS along with many local leaders of Congress, BJD, Nationalist Congress Party and Odisha Jan Morcha from the areas under Kandhamal Lok Sabha seat also joined the BJP along with Kanhar, the party said.