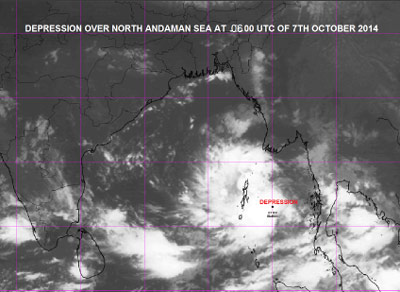 Odisha Channel Bureau Bhubaneswar, Oct 7: Odisha Government on Tuesday put the administration on alert in as many as 16 districts as storm Hudhud was brewing off the State’s coast.While the Revenue and Disaster Management Department asked the Collectors of 16 districts to remain alert, it told Collectors of the remaining 14 districts to remain vigilant to the emerging situation.The depression over north Andaman Sea remained practically stationary and lay centered at 1130 hrs IST of today, the 7th October 2014 near latitude11.50N and longitude 95.00E, about 250 km east-southeast of Long Island.It would move west-northwestwards and intensify into a deep depression within next 24 hours and subsequently into a cyclonic storm, according to the meteorological analysis of the India Meteorological Department.“It would cross Andaman & Nicobar Islands close to Long Island by tomorrow forenoon.Thereafter, the system would continue to move west-northwestwards for some more time and then northwestwards towards north Andhra Pradesh and Odisha coast during subsequent 72 hours,” the IMD added.As the IMD warned about heavy to very heavy rainfall at a few places with isolated extremely heavy falls in Andaman and Nicobar Islands and gale force winds speed reaching 70-80 kmph by Wednesday, the Bhubaneswar Meteorological Centre predicted that rain/thunder shower would occur at a few places over Odisha on Wednesday and Thursday and heavy rainfall may occur at one or two places over coastal Odisha on Friday.The Centre further predicted increase in rainfall, in coastal Odisha on October 10 and over whole of Odisha on October 11.The districts that have been alerted are Ganjam, Gajapati, Puri, Khurda, Nayagarh, Dhenkanal, Cuttack, Jagatsinghpur, Jajpur, Kendrapara, Bhadrak, Balasore, Mayurbhanj, Keonjhar, Koraput and Malkangiri.Barring Koraput and Malkangiri, the other 14 districts were hit by cyclone Phailin in October last year.The Collectors of the 16 districts have been asked to cancel the leave of all employees and Odisha Disaster Rapid Action Force (ODRAF) personnel have been directed stay be ready for any eventuality.Meanwhile, reports from different coastal districts indicated that many people had started resorting to panic buying of essential items.