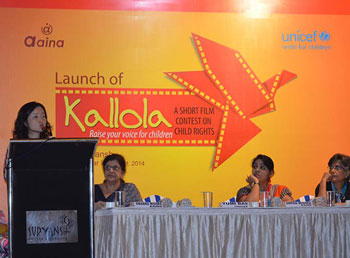 Odisha Channel Bureau Bhubaneswar, Oct 29: Aaina, an Odisha based voluntary organisation with the support of UNICEF, Odisha launched a short film contest on Child Rights called ‘Kallola’ here today.The first of its kind of contest in the state, ‘Kallola’ invites entries in 30, 60 and 90 seconds duration on the theme: Ending Violence against Children, with four sub themes – Child Labour, Child Sexual Abuse, Child Marriage and Corporal Punishment.The contest is open to everyone – professional filmmakers, film students, amateurs or anyone with a good idea and filmmaking skills.Interested participants can log onto www.aaina.org.in/kallola for information on the contest, themes, rules and the entry form.The last date of receiving entries is December 30.Launching the contest, Yumi Bae, Chief of UNICEF Odisha Field Office said, “We hope that the annual short-film contest launched today on Child Rights will provide a platform to remind us of the inviolable human rights that each and every child is born with and the responsibility that each of us, as a member of family, community and society have in ensuring that no child is denied his or her basic rights.For this inaugural year, we take up the theme of violence against children, which happens all around us.Some extreme cases are reported but most incidents go unreported, unheard, making violence against children almost invisible. And children suffer silently.The short-films will help bring the message closer to our hearts that we all have a duty to end this violence and protect our children.” Introducing the ‘Kallola’ contest to the press Sneha Mishra, Secretary, AAINA said, “Through the medium of this contest we hope that participants will be sensitized to the issue that will reflect in the films that they submit.The films will be used to further sensitize larger audiences and generate discussion and debate around this issue.” A half-day workshop for prospective participants will be held on November 11, 2014 on the format, themes and rules of the contest.An eminent Jury will evaluate the films and the best five entries will be awarded – namely 1st, 2nd, 3rd, Jury’s Choice & Viewer’s Choice awards in January and February 2015.