Land of the Sun: Koraput, Odisha

Life in its utter simplicity; life in complete rustic charm; life in the lap of nature.That’s the life of the tribals of Orissa.The State has at least 62 different tribal groups living on the hills and forests, oblivious of the march of civilization that has overtaken their brethren in the plains.Koraput was the largest district but today has been divided into four-Raygada, Koraput, Malkangiri and Nowrangpur.

The Bondas, Gadabas, Parajas, Kondhas and Koyas inhabit the forested hills of Koraput.Their dwellings are isolated and far from the influence of modern civilisation.It is, therefore, interesting to find them living as nature’s children, scantily clothed with the bark of trees, but embellished with lots of ethnic ornaments.They have a rich tradition of dance and music. 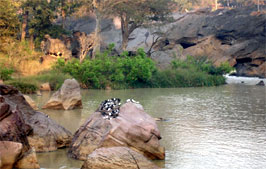 Koraput lies at a distance of 500 km from Bhubaneswar, the State capital.In Saura language, Koraput means ‘land (puta) of the Sun (kora)’ and they believe this is the birth place of the deity.Miles of mountain tracts, lush green paddy fields, vast stretches of dense sal trees and mixed forests ensure a fascinating trip for the nature lover.It takes about 12 hours to reach Koraput by road.Most of the journey is through winding ghat roads or valleys.In the monsoon, the hills and valleys are enchanting, draped with a tapestry of blue and green, with clouds hanging from cliffs of tall hills adding to the allure.The mountains, a part of the Eastern Ghats, rise to between 3,000 sq.ft.and 5,000 sq.ft.above sea level.The 132 km-line road runs through the districts of Ganjam and Gajapati.It is a land of greenery and remains a landscape of natural beauty.Chatikona has a small railway station and is the commercial centre of Bissam Katak, the gram panchayat here.From Chatikona, Niyamgiri is 10 kilometres away through valleys and hills.As we neared the land of the Dongoria Kondhas the ghat road became more scenic with dense forests of sal, bamboo, mahua, mango, jackfruit and kendu.The creepers and bushes made the forests flanking the road even thicker.Hill streams flowed all along the road on pebbled surfaces making soft gurgling noises.They are skilled horticulturists and raise crops like pineapple, turmeric, wild banana and castor along with rice, maize, ragi, and guava.Salapa is their favourite tree, as they love the beverage prepared out of salapa and pineapples.They are also hunters by nature.At the end of the day they revel in song and dance.They are very proud and rarely intermingle with other tribes or come down to the plains.From Bissam Katak, we headed for Sunabeda in Koraput district along the ghat road via Rayagada.This part of the journey too was through dense forests and ghat roads with trickling streams all along.Sunabeda is a modern township today because of NALCO and the Hindustan Aeronautics Limited factory.It is situated on a vast elevated plateau above 3,000 sq.ft.and is surrounded with tall green mountains adding to its scenic splendour.From Sunabeda, Jeypur is about 60 kilometres downhill.One has to pass through Koraput, the district H.Q.It takes about an hour and a half.Jeypur is a bustling trading centre and also rich with the bounties of nature.Jeypur was the headquarters of the erstwhile Maharaja before independence It is here that most of the hotels are located.There is a lovely reservoir on Kolab River nearby where the Bagra waterfall has been submerged.It remains a popular picnic resort for the locals.Ramgiri hills overlook the district of Malkangiri where the Bondas live.The Bondas are fierce by nature.The women shave their heads and wear beads as dresses, as they are supposed to wear only a thin strip of lower cloth made from the fibres of ‘keranga’ bark.It is their heavy jewellery that makes them outstanding.They wear broad bangles on their wrists.The ones they wear around their necks are called ‘khagalas’.The carefree life of the tribals, their dependence on Mother Nature for their livelihood and existence and their cultural traditions and practices that prevent the scourges of modern-day life like pollution and global warming was an eye-opener.If one wants to know and learn how to live with nature and not kill it, it is the tribes of Orissa who can be the best teachers.