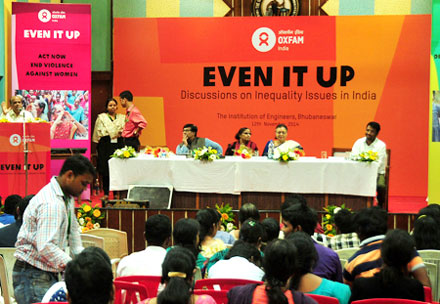 Odisha Channel Bureau Bhubaneswar, Nov 12: Issues relating to inequalities prevailing in the present-day society were discussed threadbare at a programme held here on Wednesday.Titled as `EVEN IT UP – Discussions on Inequality Issues in India’, the discussions were part of Oxfam India’s national-level campaign to generate debates and discussions on the issue of inequality in India.The campaign attempted to challenge manifestations of inequality in areas such as health, education, right to food and nutrition, violence against women, and issues of relevance for marginalised groups such as Dalits, tribals and Muslims in Odisha.Esteemed panel members from across India deliberated on the issues surrounding inequality in Odisha with a focus on social security and how inequality has been a rising concern for marginal groups in the state in the current socio-economic and political context.The half-day programme saw a panel discussion with eminent panelists Ashok Bharti, Chairperson, National Confederation for Dalit Organizations (NACDOR), Anup Dash, Department of Sociology, Utkal University, Jameela Nishat, Shaheen Women Resource Centre, Hyderabad, Shubhra Chatterjee, Director, Vikramshila Education Resource Society, West Bengal and Umi Daniel, Aid et Action, Odisha.They deliberated on issues of inequality related to Dalits, Muslim women, and children from marginal communities, and tribals in Odisha.The panel discussion was accompanied by presentations of posters and comic strips on inequality developed by communities.After the panel discussion, there was a theatrical performance by Sanjog theatre group staged a play on discrimination against Dalits and a puppet show on the issue of education of girl children. Around 300 participants from civil society organisations, NGO partners, and youth groups from NISSWAS, XIMB and Utkal University participated in this discussion.