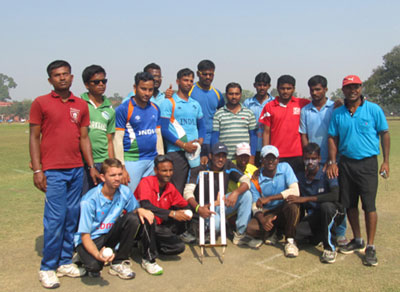 Odisha Channel Bureau Bhubaneswar, Nov 20: The three-week-long preparatory training camp of India Blind Cricket Team for the 4th ODI Blind Cricket World Cup scheduled to be held in South Africa from November 20, concluded at Ravenshaw University Ground in Cuttack today.On the concluding day of the training camp, the India Blind Cricket team held practice sessions till lunch time.The team is slated to leave for New Delhi from where they will head for Cape Town, South Africa, where the 4th ODI Blind Cricket World Cup is to be held from November 25 to December 9.A total of seven teams from countries including India, Australia, England, South Africa, Pakistan, Sri Lanka and Bangladesh are participating in this World Cup.Playing in the World Cup the Indian team will play the first match with arch rivals Pakistan on November 27 and second match with South Africa on November 28.Speaking on the preparations for the World Cup, Indian team’s Coach Patrick Rajkumar exuded confidence stating that the team is ready to repeat its winning performance of 2012 T-20 World Cup at the 4th ODI Blind Cricket World Cup in South Africa.The young and hard working team underwent three weeks rigorous training and practice sessions at the camp in Cuttack which has perfectly shaped them to overcome all the challenges at the World cup, he added.Team Manager John David hoped that the team has a very good chance to win the world cup in South Africa and has really practiced hard to shape as a formidable team.He expressed gratitude to the authorities of Ravenshaw University and Odisha Cricket Association for all the support in terms of facilities and infrastructure provided to the Indian Blind Cricket team during the three weeks preparatory camp at Cuttack.Odisha Sports and Youth Affairs Minister Sudam Marandi also visited and interacted with to the blind cricket team during the camp and said he would try to support for the coaching camp expenses and Md.Zafar’s (the lone player from Odisha) travel and equipment costs.During the 20 days training, apart from practicing, the Indian Blind Cricket team members had the opportunity to meet with team India opener Sikhar Dhawan and team Director Ravi Shastri during the ODI match at Barabati.They also had visited Puri, Konark and other places and enjoyed time at the sea beach.It may be noted here that the Indian Blind Cricket team had arrived at Cuttack on November 1 for the world cup training camp.The team comprised 17 players including Md.Jafar Iqbal of Odisha and Coach Patrick Rajkumar along with two other supporting staffs.Shekhar Naik of Karnataka has been selected as Captain.It may be noted here that 56 players from various zones were short listed from the selection trials held at Tirupati from July 17 to 20.Out of them 28 players were shortlisted for final selection trials which were held at Bangalore from 22nd to 24th of September based on their performance.Seventeen best performing players based on performance got selected to participate in the 4th ODI World Cup in Cape Town South Africa from November 25 to December 9 and were practicing at the World Cup training camp at Cuttack.Cricket Association for the Blind in India (CABI) a sports initiative of Samarthanam Trust for the Disabled has been promoting Cricket for the Blind in the country over the years since its inception.Samarthanam’s efforts were formalized by establishing the CABI in February 2011.December 2012 saw its first ever mega event being organized in the form of first ever T20 World Cup for the Blind in Bengaluru India which was a huge success.