Consultation on peace and harmony held in Kandhamal 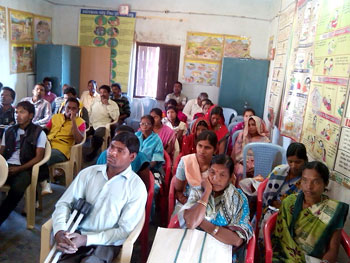 Odisha Channnel Bureau Phulbani, Dec 19: A consultation on ‘Peace & Harmony’ was organised at Daringbadi block headquarters of Kandhamal district by Campaign for Peace, Kandhamal on the eve of Minority Rights Day.The meeting was presided by chairperson of the Campaign Mohamed Sukuru and activities of consultation started after condemnation and silent prayer in the memory of innocent children who lost their life by the inhuman attack by the Taliban terrorists at Peshawar in Pakistan.Narendra Mohanty, secretary of the Campaign for Peace, Kandhamal shared the importance of Minority Rights Day saying that all human rights are minority rights and State has obligation to assure and safeguard the three pillars of minority rights such as non-discrimination, protection of identity and effective participation in every sphere.The State must enact law, policy, program with proper implementation and effective justice system, protect them from genocide, assimilation by force and ensure their effective participation from micro to macro level in decision making process, he pointed out.Among others Junash Pradhan, ex- chairperson of Daringbadi block, the leader of Kui Samaj advocate Indramani Pradhan, ex- vice chairperson and Samiti Member Bilasini Nayak, executive director of ‘Jagruti’ Kailash Dandapat, eminent social activist Chakradhar Mallick, Tiadi Nayak, Advocate Pradeep Sahu, women leader Sarasila Pradhan were spoke on the topic ‘Peace & Harmony’.They were discussed about the ground realities to create a peaceful society in a communal prone district like Kandhamal and urged all participants to build up a united voice against devil forces to build up a peaceful Kandhamal.They shared their views regarding the myth and realities about the relationship of tribe and Dalit communities and expressed their commitment to fight against fundamentalist and communal forces.In his presidential address Sukuru urged all audience to build up a scientific attitude in all respect which will help to form a bias free and just society.People from various sections of society including journalists, advocates, PRI members, social activists and women leaders participated and promised to lead and spread the ‘Campaign for Peace’ across Kandhamal district.