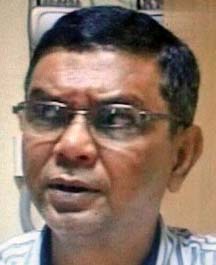 Odisha Channel Bureau Bhubaneswar, Dec 19: A Deputy Superintendent of Odisha Police, Pramod Panda was arrested by the Central Bureau of Investigation here today for his alleged involvement in the Odisha mega chit fund scam relating to the Artha Tatwa (AT) Group.Panda was formally arrested after the CBI officials interrogated him for the third consecutive day on Friday.According to sources, Panda derived undue financial benefits and was part of a conspiracy for duping investors who invested money in the schemes of AT Group.The investigating agency had reportedly found evidence that proved diversion of AT Group funds to the bank account of a city-based computer centre named Zee Institute of Creative Arts (ZICA), run by Panda’s wife Gitanjali Panda.The CBI officials had earlier raided Panda’s residence.A visiting card of AT Group head Pradeep Sethy and a letter that Sethy had written to Panda from the jail was found during the raid.Panda’s plea for anticipatory bail plea in the case was rejected by the Orissa High Court on Monday.Panda was suspended in February this year for allegedly threatening chit fund scam petitioner Alok Jena asking him to withdraw his case in the Supreme Court.The police officer, who earlier worked with the Crime Branch of Odisha Police, however, was reinstated in June and was posted as DSP, District Intelligence Bureau , Nayagarh.The CBI has recently filed a chargesheet against the AT group naming as many as 16 persons, including Sethy, senior BJD legislator Pravat Tripathy, former Advocate General of Odisha Ashok Mohanty.While all other accused are in judicial custody, Mohanty is on bail following his arrest by the CBI.