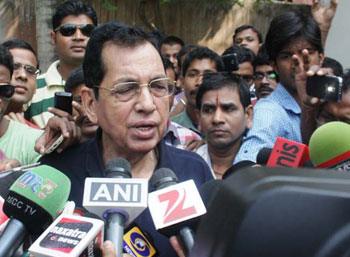 Odisha Channel Bureau Bhubaneswar, Nov 21: Rajya Sabha Member and Odisha Jan Morcha president Pyarimohan Mohapatra was questioned by the Central Bureau of Investigation in connection with the mega chit fund scam here on Friday.Mohapatra, who arrived in the CBI office here in response to the summons issued to him, was grilled for more than four hours for his alleged links with the Seashore Group headed by Prashant Dash.The CBI had simultaneously raided the residences of Mohapatra in Bhubaneswar on November 18 and seized incriminating documents.Mohapatra, who had welcomed the CBI raids, however, did not give details about his questioning after he came out of the investigating agency’s office.The OJM leader was confronted with Prashant Dash during his questioning.Dash, main accused in the case, is at present in CBI custody.Odisha Government had signed several MoUs with the Seashore Group earlier when Mohapatra was in the ruling Biju Janata Dal.Mohapatra was questioned by the Enforcement Directorate in connection with the Odisha mega chit fund scam on November 17.He was summoned by the Directorate and questioned for more than two hours about his alleged links with the Seashore Group.Dash was also interrogated by the Directorate for several days by taking him into their custody earlier.While the Central Bureau of Investigation is investigating into the main cases relating to the Ponzi scam, the Directorate is probing into the money laundering aspects.The CBI had registered cases relating to the chit fund scam in Odisha on the directions of the Supreme Court of India and the Directorate was also asked to probe into the laundering of the huge amounts of money collected by the chit fund companies from lakhs of people across the State.