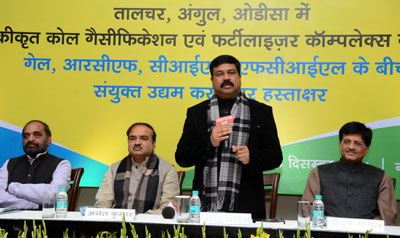 Odisha Channel Bureau New Delhi, Dec 24: In a significant step towards augmenting the domestic urea capacity, four PSUs – GAIL (India) Limited, Coal India Limited (CIL), Rashtriya Chemicals and Fertilizers (RCF) and Fertilizer Corporation of India Limited (FCIL) – today signed Joint Ventures Agreements (JVAs) to set up an Integrated Coal Gasification cum Fertilizer and Ammonium Nitrate complex at Talcher in Odisha.The JVAs were signed in the presence of Ananth Kumar, Union Minister for Chemicals and Fertilizers, Dharmendra Pradhan, Union Minster of State for Petroleum & Natural Gas (Independent Charge), Piyush Goyal, Union Minister of State for Power, Coal and New and Renewable Energy (Independent Charge) and Hansraj Gangaram Ahir, Union Minister of State for Chemicals & Fertilizers.GAIL, RCF, CIL and FCIL on 5th September, 2013 signed a Memorandum of Understanding for jointly setting up Fertilizer and Ammonium Nitrate complex at Talcher.JV1, GAIL Coal Gas (India) Limited shall be led by GAIL and will be primarily responsible for setting up the Upstream Coal Gasification and Gas Purification section for production of Ammonia Syn Gas for downstream fertilizer unit at an estimated investment of Rs 3000 Cr.GAIL had floated an Expression of Interest for Technology selection for coal gasification and shall be finalized by end of January, 2015 which is critical for the success of the project.JV-2, Talcher Chemicals & Fertilizers Limited, shall be led by RCF and will be primarily responsible for setting up Ammonia-Urea, Nitric Acid-Ammonium Nitrate plants at an estimated investment of Rs 6000 Cr with majority stake held by RCF & CIL.Pre-project activities are also been undertaken by respective RCF and CIL.The project comprises of 3850 MTPD Urea plant, 2700 MTPD Ammonia plant, 850 MTPD Nitric Acid plant and 1000 MTPD Ammonium Nitrate plant.GAIL will put up the Coal gasification plant and RCF and CIL will put up the other downstream plants of Ammonia, Urea, Nitric Acid and Ammonium Nitrate.Subsequent to Detailed Feasibility Study, execution of construction activities is likely to start in year 2015-16 and expected to complete by the year 2019.A suitable coal block for supplying coal to the project in the vicinity of the complex is being identified on priority basis by the Government of India.The process for allocation of the block is being initiated by Ministry of Coal.The project is of strategic importance for the country as it aims to make breakthrough for an alternative source of feedstock in the form of abundantly available coal from domestic sources.As per the available statistics, the total coal reserves in the country are around 300 billion ton with recoverable reserve of 173 billion ton.Thus the potential exists for converting these reserves into value added products like syn gas for use by fertilizer and power plants at affordable price.Revival of the Talcher unit will trigger a great economic boom in Odisha and eastern part of the country as it will generate opportunities in the form of direct and indirect employment for the people in the region.Besides, the project will give the much needed urea fertilizer to the farmers of the country.Success of this project is expected to be a game changer and shall pave a way forward to the production of fertilizer from abundantly available coal resulting in less dependency on imports, according to an official release.