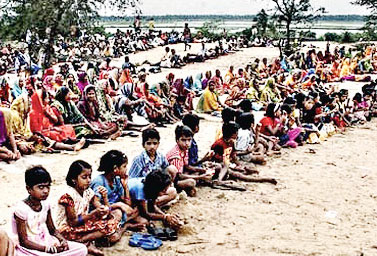 Odisha Channel Bureau Bhubaneswar, Dec 30: Union Cabinet’s decision approving the ordinance amending the Right to Fair Compensation and Transparency in Land Acquisition, Rehabilitation and Resettlement Act, 2013, even before the law has been actually implemented on the ground is completely unacceptable and reminds us of the anti democratic and authoritarian streak of this government, said Prafulla Samantara, national convenor of National Alliance of People’s Movements (NAPM) and president of Odisha chapter of Lok Shakti Abhiyan here today.In six months of its existence NDA government has already used the ordinance route three times, he said in a statement issued at a press conference.“We fail to understand what the urgency is at this moment that NDA government has to take the ordinance route.This is only being done as a measure to benefit the Corporate Houses and nothing else.Rs.20 lakh crore investments are not stuck because of the new land act, since the law has only been in existence for one year,” he said.“Modi has displayed least patience for the Parliamentary traditions and often remained silent on the key issues concerning the nation and blamed opposition for non-functioning of the Parliament.Matters concerning the lives of millions of the farmers in this country can’t and shouldn’t be decided by mere ordinance.These are matters of grave importance and need thorough debate and discussion in this democracy.BJP when in opposition had opposed the ordinances for law making and now they are doing exactly that, how shameful,” Samantara said in his statement.“The government is claiming that the decision is not anti farmer since they are not touching the monetary compensation, but the issue was not only compensation.A piece of land has an interest from many sections workers, share croppers – other than the land owners and they all get affected by any acquisition,” he observed.“The dilution of the need for the consent and conducting of the social impact assessment for all the projects is completely uncalled for and will only make matters worse.These two provisions are central to addressing the issue of ‘forced land acquisition’ and ‘resulting impoverishment” to the communities.” “Even as we wait for the full details of the ordinance, we would like to say that the 2013 Act provided relief to so many farmers where land was forcibly acquired or land was not utilised or adequate compensation not paid.The ordinance is changing that which is completely anti farmer.We all know that there are nearly 10 crore people displaced by various projects since independence and this government rather than providing any relief is only concerned about the needs of the industry,” Samantara said. “It remains a fact that intense struggles are going on in various states across the country around the issues related to land acquisition, displacement, development plans and projects.The farmers, fishworkers, labourers, artisans, facing uprootment from not just their socio-cultural environs but also livelihoods, are compelled to get united and raise their voices against unjust displacement pushed by Modi Sarkar.The resistance will only become much more vocal now,” Samantara added.