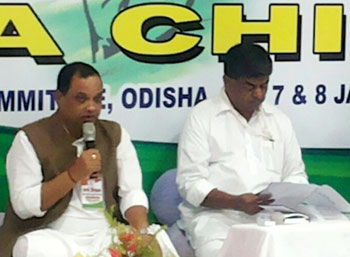 Odisha Channel Bureau Bhubaneswar, Jan 7: Congress in Odisha, under the leadership of newly appointed Pradesh Congress Committee president Prasad Harichandan, has started the process to prepare a new political strategy to regain its lost ground in Odisha.The party leaders began a two-day long `Nava Chintan’ conclave in the city on Wednesday to discuss and develop a new strategy in an effort to oust the Biju Janata Dal from power in the State in 2019.The meeting assumes significance as BJP national president Amit Shah was in the State on a two-day visit, and the Biju Janata Dal Government was announcing new populist schemes to maintain its organisational strength.The Nava Chintan conclave is being held by dividing discussions into several sessions.While Harichandan is presiding over the sessions, among others who are attending them include AICC general secretary B.K.Hariprasad and AICC secretary Subhankar Sarkar.Factionalism in the party in the State seems to have to come to an end with the taking over of Harichandan as the new president of the PCC.All senior leaders, former PCC presidents, former Chief Ministers, sitting and former legislators, former MPs, district presidents and leaders of the party’s frontal organisations are attending different sessions at the conclave.All leaders taking part in the conclave are giving their views and suggestions about the measures the party should adopt at various levels and on various issues to strengthen its organisation across the State.At the end of the two-day session, Harichandan is scheduled to address a press conference on Thursday afternoon to announce the new political strategy that the party intends to adopt to win elections in futureEven as the BJP was growing in the State, Congress plans to make the ruling BJD its main target in the coming days, a senior leader attending the conclave said.