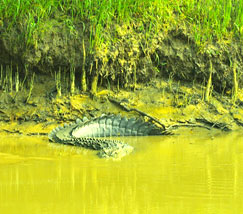 Odisha Channel Bureau Kendrapara, Jan 16: The population of estuarine crocodiles along the water bodies of Bhitarkanika National Park in Odisha has increased this year unlike the drop in their number witnessed last year.The latest census of these animals has brought to light the rising trends of population of these endangered reptiles.The 2015 census figure of salt-water crocodiles released on Thursday put the figure at 1665.The number of crocodiles in the area stood at 1644 last year.On the other hand, the crocodiles’ number was counted at 1649 in 2013 year.The breakup of crocs growth-wise is hatchlings 511, yearlings 306, juveniles 317, sub-adults 147, adults 308 and three of above 20 feet long, according to officials.The croc headcount exercise continued from January 1 to 12.Initially foggy and overcast weather condition had hindered the enumeration of crocs.However, with weather brightening up, the exercise was carried out in a smooth manner.Twenty-six teams comprising crocodile experts and wildlife personnel undertook the operation during early morning hours and during the sunset.The whole of 145 sq km area of the national park, besides an estimated 50 sq km pockets located outside the protected forest were brought under the purview of croc headcount, said Kedar Kumar Swain, Divisional Forest Officer, Rajnagar Mangrove (Wildlife) Forest Division. The major highlights of census findings this year is that at least three giant size crocodiles above 20 foot long were spotted during the annual enumeration operation.This includes the 22 foot-long crocodile, that figure’s in Guinness of book records as the World’s largest living estuarine crocodile.The giant reptile was spotted firmly ensconced in Mahinsadiha water-inlet of the Bhitarkanika river system.All the giant crocodiles were male species.This apart, the enumerators during the course of annual headcount drive spotted about a dozen of numbers of albino crocs.These species came under sub-adult category measuring above 6 feet.Besides these species in the wild, Gori a 39-year-old female white crocodile is being reared in captivity at Dangamal Crocodile Research Centre, said crocodile researcher Sudhakar Kar, who headed the census operation.The croc-infested Bhitarkanika river system apart, the 104-member census team covered the water-bodies in and around the Mahanadi deltaic region.The spheres of headcount exercise were expanded in view of frequent sighting of these animals in riverside villages.The enumerators extensively covered vulnerable riverside villages where reports of man-croc conflict had reached a flashpoint in recent past.However, the sighting of these reptiles was few and far.82 numbers of crocodiles were sighted outside the national park area while 1583 crocs were counted inhabiting in the national park water-bodies, said forest officials.The census findings have made it ample clear that the species are itinerant in nature and stray into adjoining water-bodies because of its increase in hyper-salinity contents.After a temporary sojourn, they leave for their permanent habitation corridors within the Bhitarkanika habitation corridors.