MMDR ordinance will prove to be a milestone: Tomar 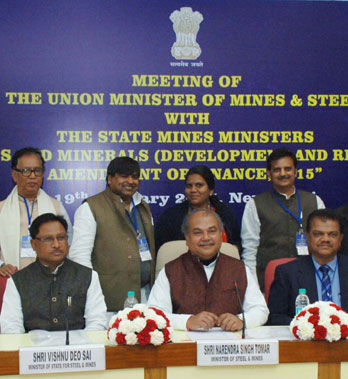 Odisha Channel Bureau New Delhi, Jan 19: Union Minister of Steel and Mines Narendra Singh Tomar has said that the Mines and Minerals (Development and Regulation) (MMDR) Ordinance is a revolutionary step in revival of mining sector in the country, hitherto stagnated due to various reasons.Addressing a meeting of mines ministers and secretaries from across the country here today, the Minister said that auction will bring in greater transparency and higher revenue for the states. Simultaneously simplification and transferability will also attract private investment, he added.According to a PIB release, the Minister said that the classification of minerals will lead to their better scientific exploration and with more power to the States mining process will be expedite.The meeting was organised for preparing a roadmap for implementation of the ordinance was attended by Minister of State for Mines and Steel Vishnu Deo Sai, Mining Ministers from 11 States, Secretary (Mines) Anup K.Pujari, Additional Secretary (Mines) R.Sridharan, and senior officials from the Ministry of Mines.Pressing upon the need for developing a sound database for minerals in India, Tomar averred that detailed exploration is the first step in mining and to set realistic goals and make workable plans, it is imperative to know the true measure of our resource base.He stated that as per preliminary assessment, 199 cases of various states would be ready for auction with some effort.But such auctions would also depend on the finalisation of modalities for conducting auction and subordinate rules therein.The Minister pointed out other provisions of the ordinance, such as, stricter penalties for illegal mining, establishment of National Minerals Exploration Trust (NMET) to give impetus to exploration, removal of prior approval of the centre to eliminate delays, and provision for District Mineral Foundation (DMF) to address the concerns of mining-affected people.Citing the example of falling levels of iron ore production in the country, Tomar urged states to revive mining in all earnestness.Acknowledging the uniqueness of different minerals and different regions, Tomar solicited opinions and suggestions of state representatives for firming up a holistic implementation plan to further strengthen the ‘Make in India’ vision of the government.Mining ministers and secretaries from different states expressed optimism over the amendments, and offered constructive suggestions for its implementation on the ground level.It was agreed that delays in environment and forest clearances had to be resolved by MoEF for providing unhindered support in growth of mining.Following are the key features of the Ordinance:• Removal of discretion; auction to be sole method of allotment: The amendment seeks to bring in utmost transparency by introducing auction mechanism for the grant of mineral concessions {Section 10 B &11}.The tenure of the mineral concession have been increased from the existing 30 years to 50 years {Section 8 A (1), (2), (3) and (4)}.• Impetus to the mining sector: The mining industry has been aggrieved due to the second and subsequent renewals remaining pending.In fact, this has led to closure of a large number of mines.The Ordinance also addresses this issue.Sub-Section 5 and 6 of Section 8(a) of the Ordinance provides that the Mining Leases would be deemed to be extended from the date of their last renewal to 31st March, 2030 (in the captive miners) and till 31st March, 2020 (for the merchant miners) or till the completion of the renewal already granted, if any, whichever is later.• Safeguarding interest of affected persons: There is provision to establish District Mineral Foundation (DMF) in the districts affected by mining related activities {Section 9 (B)}.• Encouraging exploration and investment: Further, the Ordinance proposes to setup a National Mineral Exploration Trust created out of contribution from the mining lease holders, to have a dedicated fund for encouraging exploration in the country {Section 9 (C)}.• Simplification of procedures and removal of delay: The amendment removes the need for “previous approval” from the Central Government for important minerals like iron ore, bauxite, manganese, etc., thereby making the process quicker and simpler.Similarly, under Section 5(2) (b), the State Governments to devise a system for filing of a mining plan obviating need for approval by the Central Government.The Ordinance also provides that the tenure of any Mining Lease would now be 50 years in place of 30 years in the existing Act.• Stronger provisions for checking illegal mining: In order to address the escalating problem of illegal mining, the penal provisions have been made further stringent- Higher penalties up to 5 lakh rupees and imprisonment up to 5 years.