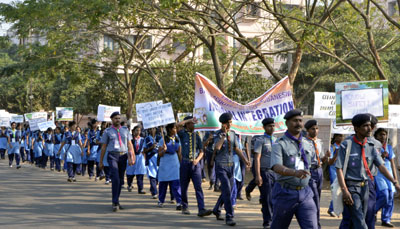 This public awareness rally was organised by East Coast Railway wherein, Bharat Scouts & Guides volunteers from different Railway Zones all over the country participated in the rally to educate the general public about various safety measures that need to be taken to avoid road mishaps and keep the environment clean and hygienic.Swachh Bharat – Clean India – Campaign was the major theme of the rally.Besides, the other themes involved Road Safety & National Integration.Little Children and youth representing various parts of the country walked with a mission inspiring the common man and touching people’s hearts and, going by the response received from the people in various colonies and on the streets of Bhubaneswar, their mission was a grand success.The Walkathon culminated at the East Coast Railway headquarters in the city and the volunteers performed street plays wherein all these inspiring messages were delivered by young children and the huge audience was left spellbound.Rajiv Vishnoi, General Manager, East Coast Railway, was there to encourage the young Scouts & Guides.He declared cash awards to each of the participating teams as a token of appreciation.