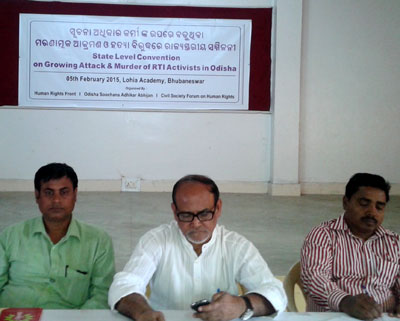 Odisha Channel Bureau Bhubaneswar, Feb 6: Hundreds of RTI activists from different corners of Odisha will stage a demonstration outside the State Assembly here on April 14 to register their protest against the attack of RTI activists in the State.National level RTI activists, including Aruna Roy and Nikhil Dey are being invited o address the rally.A decision in this regard was unanimously taken at a State level convention of RTI activists and human rights defenders in protest against murder of RTI activists held at Red Cross Bhavan on Thursday.The meeting was organised under joint auspices of Odisha Soochana Adhikar Abhijan, Human Rights Front and Civil Society Forum on Human Rights.Hundreds of RTI activists and human rights defenders who attended the convention condemned the recent murder of RTI two activists in the State that has set an alarming bell for them to stand united and work together to fight against corruption and irregularities in the execution of development works.While RTI activist Ganesh Chandra Panda of Rangeilunda Block of Ganjam district was allegedly murdered by vested interest groups on December 28 last, another RTI activist Krupasindhu Sahu of Niali Block of Cuttack district was allegedly killed by hired killers a few days ago because of his attempt to expose corruption and misappropriation of fund in BGREI fund (Bringing Green Revolution in Eastern India)The convention also decided to organise a meeting in protest against the murder of Krupasindhu Sahu at Niali market on April 9.In order to carry out united action for protection of RTI activists and fight corruption, a common platform of all activists called Unity for Protection of Activists of Odisha was suggested at the convention and the same was endorsed by all the participants in the convention. Activists Pradip Pradhan and Manoj Jena were selected as conveners of the Forum.