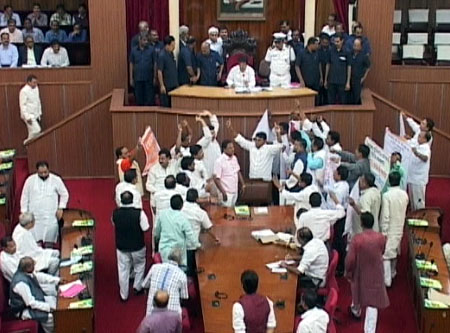 Odisha Channel Bureau Bhubaneswar, Dec 7: The Bharatiya Janata Party Members of the Odisha Legislative Assembly today decided not to take their daily Assembly sitting allowance for the winter session that was adjourned sine die on Friday.The legislators took the decision about not claiming their sitting allowance for the just conclude session since the Assembly failed to transact business normally in all the 14 days when it remained in session.A decision in this regard was taken unanimously at a meeting of the BJP Legislature Party held at Bargarh today, according to Basanta Panda, Leader of the BJP Legislature Party.There is a provision for the legislators to get sitting allowance for their presence in the Assembly when the House is in session.Terming the sine die adjournment of the Assembly half way unfortunate, Panda said that though the BJP MLAs were present in the House to discuss issues pertaining to the people’s interest, the legislators of the ruling Biju Janata Dal had stalled the proceedings.The ruling BJD had no moral courage to face issues such as the chit fund scam, mining scam and land scam, Panda said.Opposition Congress has also blamed the BJD legislators for stalling the Assembly proceedings to avoid a discussion on the chit fund scam and other burning issues.Leader of Opposition Narasingha Mishra had on Saturday blamed Chief Minister Naveen Patnaik for hatching a conspiracy with his party MLAs to avoid any discussion with the opposition on the chit fund scam. The winter session, which started on November 20 and was scheduled to end on December 20, was adjourned sine die on December 5 after it witnessed pandemonium continuously with opposition Congress and BJP demanding a debate on the mega chit fund scam and BJD MLAs stalling the proceedings in their attempt to foil the opposition attack.