Team India should aim at a high rate of growth: Modi 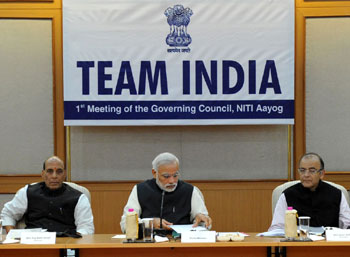 Odisha Channel Bureau New Delhi, Feb 8: Prime Minister Narendra Modi today called upon all Chief Ministers to work with the Centre to forge a model of cooperative federalism, whereby the Centre and the States – TEAM INDIA – can come together to resolve differences, and chart a common course to progress and prosperity.Chairing the first meeting of the Governing Council of NITI Aayog, Modi described the meeting as one which had the potential to bring about historic changes.The Governing Council of NITI Aayog would help advance the national cause “as we jointly define it.” Noting that India cannot advance without all its states advancing in tandem, Modi said the idea was to bring up all states together in the spirit of Sabka Saath, Sabka Vikas.He added that he envisioned different states competing with each other in promoting governance initiatives, in a spirit of “cooperative, competitive federalism.” He said that the world has started looking at India differently, but “our biggest challenge still is how to eliminate poverty.” He said jobs cannot be created, and poverty cannot be removed without growth.Therefore, he added, “first and foremost we should aim at a high rate of growth.” The Prime Minister noted that projects are often held up for want of timely decisions, and a project can get stuck at any stage in any forum.He said this prevents the people from getting benefits of the projects, and also leads to cost escalation.He requested the Chief Ministers to give personal attention to such factors which slow down projects.He urged all Chief Ministers to focus on the cycle of Investment, growth, job creation and prosperity.He also suggested that an officer be identified in the state governments to monitor and ensure a smooth resolution of the pending issues so as to expedite the project implementation.Modi emphasised that the Centre wished to empower the states with finances, with technology and knowledge so that they are able to plan better and execute even better.The Prime Minister also expressed hope that through the mechanism of the NITI Aayog, India could move away from “one size fits all” schemes, and forge a better match between the schemes and the needs of the states.He said that for federalism to work well, states must also fulfill their role in promoting the shared national objectives.He said that the critical element for cooperative federalism to flourish is that states commit to the path they choose within the context of the shared national objectives and then deliver on that commitment.”Our focus on Good Governance is the need of the hour,” Modi said, adding that “whatever we do it should be well thought, it should be well-executed and it should have desired outcome.”