E-version of India/Bharat Reference Annual from next year 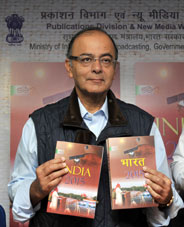 Odisha Channel Bureau New Delhi, Feb 9: Minister of Finance, Corporate Affairs, and Information and Broadcasting Arun Jaitley has said that the publication India 2015 reflected a great tradition of authentic and updated information on different aspects of India’s development.The Minister emphasised that books and other knowledge products presently in printed format ought to be made available through digital medium in view of the shift in technology paradigms.The new Digital medium would provide enhanced accessibility and affordability of information to a wider audience.Jaitley stated this while releasing India /Bharat 2015 Reference Annual published by Publications Division and New Media Wing under the aegis of Ministry of Information & Broadcasting here today.Elaborating further, Jaitley said that the Digital version of ‘The Making of the Constitution of India’ documentary was a fine instance of utilising the digital media for archival and preservation of knowledge traditionally held in printed form.Digitization of printed books having valuable information on India’s development would be useful reference material for the youth and to the audience worldwide.Despite multiple platforms, the relevance of the traditional formats still existed as in the case of India/Bharat 2015 Reference Annual.As a rich repository of relevant information, India/Bharat 2015 Reference Annual would be a good addition to all the libraries, Jaitley added.Minister of State for Information & Broadcasting Rajyavardhan Rathore was also present on the occasion.Secretary I&B Bimal Julka said that the unique feature of this year’s Reference Annual was the addition of a special chapter on flagship programmes of the Government of India like Swachh Bharat Mission, Make in India, and Pradhan Mantri Jan Dhan Yojana.A diary of national events was also added this year.To ensure mobility and easy accessibility, the e-version of the Reference Annual would be made available in the next year.Digitizing, archiving, and preserving rich knowledge content available in print format would be given priority.India/Bharat-2015 holds place of pride among the annual publications of this genre as being an exhaustive and authentic repository of information about the activities, progress and achievements of various ministries and departments of Government of India during the year.The publication deals with all aspects of developments from rural to urban, industry to infrastructure, science and technology, art and culture, polity, economy, health, defence, education and mass communication.The 59th year of publication of Reference Annual has seen an increase in its print order to 1,15000 copies this year, up from 37,000 copies in 2007.