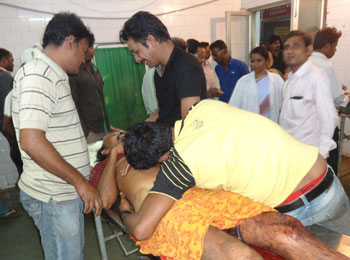 Odisha Channel Bureau Kendrapara, Feb 13: One person was killed and at least four others, two of them seriously, were injured today afternoon as a rogue wild boar on rampage attacked a group of farm labourers in Hatabanapur village under Derabish police station in this coastal Odisha district.The incident occurred when the farm labourers were engaged in Rabi crop cultivation operation in the agriculture field.The village where the animal attack was reported is far-away from forest areas.Animals never strayed into the village area in the past.So the victims were shell-shocked to spot the animal in the crop field.As they tried to chase the ‘intruder’, the animal turned violent and attacked the farm workers one by one, said forest officials. The deceased has been identified as Kunja Behari Das (56) while four other sustained injuries following the animal attack.Two of the critically injured persons- Sadhu Charan Das (70) and Baishnab Das (55) – are undergoing treatment at the Kendrapara district headquarters hospital.“Such act of trespassing and consequent attack on humans by wild boar was never witnessed in Kendrapara and Derabish areas.It is quite perplexing to find the intrusion of these animals in places which are bereft of forest cover,” said Sudarshan Behera, Divisional Forest Officer of Cuttack Territorial Forest Division.Bhitarkanika’s mangrove forest cover is an ideal habitat for wild boar.But there is remote possibility of boar straying into these thickly populated pockets from far away Bhitarkanika.There are reports of wild boar inhabiting in Asiagada forest near Lalitgiri Buddhist monastery in Jajpur district.The rogue wild boar might have strayed from the said forest cover, Behera commented. Forest personnel have begun maintaining night watch and vigil in the village.The department has constituted two night-vigil squads to drive away the wild boar.The villagers have been advised to avoid movement during night, according to forest officials.