Odisha Channel Bureau Kendrapara, Aug 25: With nearly 5,000 more birds making their way to Bhitarkanika national park for their monsoon sojourn, the wetland and mangrove-infested sites of the national park has once again re-established its place in the state as one of the congenial habitat for the winged species.As against 91,545 spotted last year, 96,437 were counted making Bhitarkanika wetland spots their nesting sites this year. 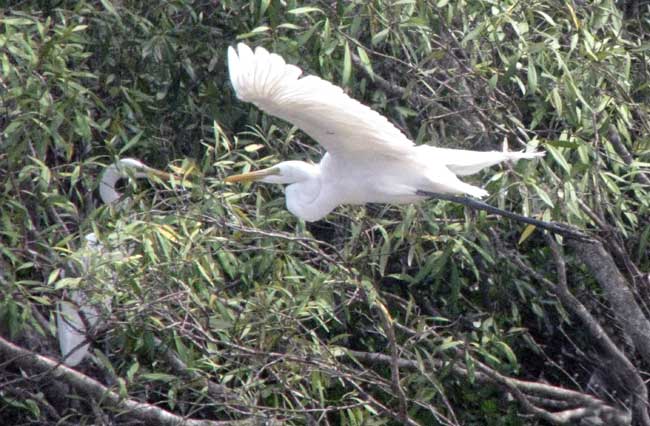 The breakup of local migrant birds arriving here in past years is 2007 – 52,096, 2008 – 71,383, 2009 – 70,484, 2010 – 41,168, 2011- 59,973 and 2012 – 70,105, 2013 – 79,548 and 91,545 – 2014.There has been a steady rise in the number of local water-birds who thronged the heronry and wetland spots here for their seasonal sojourn.“As the monsoon spell was not steady this time, our expectation was that lesser number of local migrant birds would visit the site.But we were proved wrong.Local migrants birds visited in large numbers”, said B.P.Acharya, Divisional Forest Officer, Rajnagar Mangrove (Wildlife) Forest Division.Prominent among the species arriving here for nesting are Grey Heron, Purple Heron, Darter, Cormorant, Large Egret, Intermediary Egret and Little Egret.The birds’ habitat spread across around four-hectares-stretch.They wing their way in and around the water bodies adding to the scenic beauty of the place.There was ample of food security for the birds as the place crisscrossed by innumerable water inlets and nullahs is free of human interference, the officials said.Lack of human interference, ideal climatic condition, cool breeze and the river system here all have emerged to the liking of these delicate chirpy winged species.It’s pertinent to note here that noted ornithologist Salim Ali made a chance-discovery of Bhitarkanika birds’ habitat while on a casual visit to Bhitarkanika in 1981.Forest personnel informed about a dozen types of local residential birds congregate at the Bagagahana heronry within the park for nesting and breeding every year.The species are open bill stork, Little cormorant, Intermediary Egret, Large Egret, Little Egret, Purple Heron, Grey Heron, Night Heron, Darter, White Ibis and Cattle Egret.