Odisha Channel Bureau Kendrapara, Sep 3: A 60-year-old fisherwoman was grievously injured as she was attacked by a salt-water crocodile in a creek of Kharinasi village under Mahakalpada police station jurisdiction of this coastal Odisha district today. 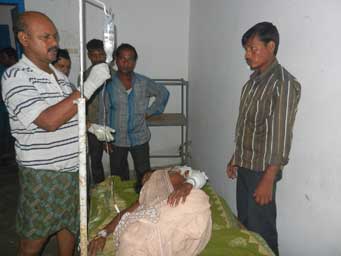 The mishap took place when the victim Akhila Gayan was engaged in fishing in the crocodile-infested water body.The crocodile after attacking was dragging the victim into water-body.However, a group of fellow fishermen who were there at the bathing ghat raised alarm and rescued the woman.The victim has sustained multiple injuries, and has been admitted in the government-run Mahakalpada Community Health Centre.She is out of danger, hospital sources said.The areas close to the Bhitarkanika Wildlife Sanctuary are presently encountering man-crocodile conflict with a man killed by a crocodile and at least six persons injured following crocodile attack since past two months.The latest croc attack occurred outside the national park limits.The state forest department would bear the cost of treatment of the woman injured in croc attack.Besides, the department would also award compensation sum to the injured person’s family as per revised rules, an official of the forest department said.