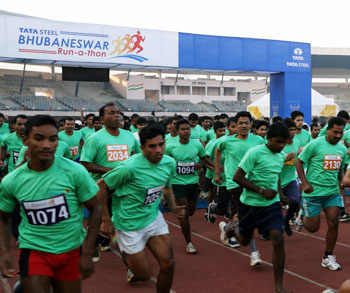 Odisha Channel Bureau Bhubaneswar, Feb 15: More than 3,000 people participated in the Bhubaneswar Run-a-thon, the first professional run of the city organised by the steel major Tata Steel here today.The 10km run was flagged off at 6 am at Kalinga Stadium by film actor and Biju Janata Dal MP Siddhanta Mahapatra, cricketer Saurabh Tiwary and other dignitaries.Sukumati Laguri and Pravesh Sini were the winners in female and male category respectively in 10km run.They were awarded Rs.51,000 each.The Run-a-thon was followed by 7km run for Corporates and 7km run for institutions, 5 km run for school children and 5 km walk for citizens and 3 km run for differently-abled people.The list of the winners is attached here.The run, starting from Kalinga Stadium went 5 km towards Chandrasekharpur, taking u-turn from there ended at the stadium.For the first time in Odisha, the runners were given smart RFID (Radio Frequency Identification) chips to track the participants’ performance and location bringing a professional sporting experience.The Kalinga Stadium wore a festive look as thousands of people including senior government officers, corporate executives, students from various institutions and schools ran in different categories while a crowd of people from different walks of life cheered for them.The prize money for the champions of the event was as follows – 10km men and women Rs.51,000 each; 7km men and women for corporates Rs.15,000 each; 7km men and women for institutions Rs.15,000 each.Besides the other first 4 winners in different events, both male and female, were also awarded in the run.Speaking on the occasion, Arun Misra, Vice President of Tata Steel’s Gopalpur Project said that the huge success of the Tata Steel Bhubaneswar Run-a-thon proves the appeal of such professional events to the sports loving people of the State.Tata Steel is committed to make it a landmark event in the sporting calendar of Odisha in coming days, he added.