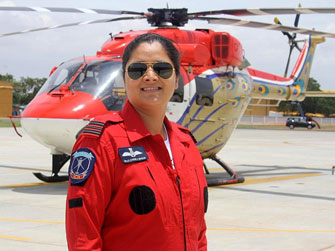 Odisha Channel Bureau New Delhi, Feb 20: Women officers in the Indian Air Force continue to storm new bastions.The IAF’s much heralded helicopter display team ‘Sarang’ now boasts of a women pilot Squadron Leader Deepika Misra and a woman engineering officer, Flight Lieutenant Sandeep Singh in their team marking new beginnings.It was during her passing out parade at Air Force Academy, in December 2006 that Deepika Misra, then a Flight Cadet, first fell in love with the aerobatic displays by the ‘Surya Kirans’ and ‘Sarang’, IAF’s fixed-wing and rotary-wing aerobatic display teams respectively.According to a release issued by the Union Defence Ministry, Deepika imagined herself flying some day in either of the formation flying teams.Back then, however, it seemed an impossible dream.But she never gave up hopes and prayed hard.She was commissioned in the helicopter stream and was posted to a Chetak/Cheetah helicopter unit.Women short service commissioned pilots were only permitted to fly these single engine helicopters then.In a major policy shift in 2010, IAF allowed conversion of women pilots to twin-engine category of medium to heavy-lift helicopters.Deepika felt extremely lucky.Having notched up nearly 1,600 hours on Chetak and Cheetah helicopters after her two stints at Bareilly and Udhampur, Deepika was more than ready when the opportunity came.IAF had meanwhile also sought volunteers from amongst women helicopter pilots to join the Sarang Team.Sqn Ldr Deepika had no hesitation and promptly volunteered for the new challenge.She was among the first to be inducted into the indigenously built Advanced Light Helicopter while a few others joined the Mi-8/Mi-17 class of helicopters.Sqn Ldr Deepika joined the Sarang Unit last July.Her prayers were now answered.In the process, she also became the first IAF woman pilot ever to join a formation display team.Incidentally, Deepika’s husband, Sqn Ldr Sourabh Kakkar, an aeronautical engineering officer was already posted to the Sarang unit and the couple would now be a team.Deepika would not remain the only women officer in the Sarang outfit for long.Flt Lt Sandeep, a lady engineering officer would soon join her in the Sarang unit.Both Deepika and Sandeep now share a rare camaderie as among the first and the only two lady officers in the Sarang team.Incidentally, ‘Sarang’ is the only second military helicopter display team in the world after ‘Blue Eagles’, the British Royal Army Corps helicopter display team.Having begun her conversion in right earnest, Sqn Ldr Deepika is nearing completion of her operational conversion before beginning her flying as a Sarang formation member.She is training hard and understanding the nuances of formation flying, which was always among her most favourite flying profiles.Sarangs are the show-stoppers at the ongoing Aero India 2015.For the present, Sqn Ldr Deepika is happy doing her role as the ‘Safety Officer’ of the team.She is required to monitor the formation display and debrief the team members after the sortie.“It is a great learning process,” she says.Meanwhile, an onerous responsibility rests on the shoulders of Flt Lt Sandeep.Keeping the metal birds serviceable at all times is her responsibility along with six other engineering officers.Having another lady officer in the team as a flying member is a great source of inspiration, she says.Both Deepika and Sandeep are, however, sure of one thing.They have a great responsibility to uphold the highest standards expected of them and are hopeful that someday there will also be an all-women team in one of the ALH in the Sarang quartet.As she steps out for her day’s flying job, Sqn Ldr Deepika feels happy to tell Aalya, her bewildered four-year old daughter that she will look out for her from the sky.It seems only a matter of time when little Aalya will get used to seeing her mother perform aerial ballad.Perhaps someday she too may just follow into her mother’s role.