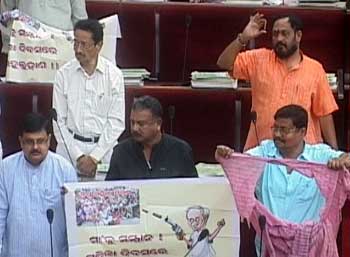 Odisha Channel Bureau Bhubaneswar, Mar 11: Odisha Government on Wednesday ordered a probe into the firing incident during a clash between anti-liquor protesters and police in Namtara village in Rajkanika area of Kendrapara district on March 8.The probe will be conducted by the Revenue Divisional Commissioner (Central) and those will be found guilty will be taken to task as per the report, State Parliamentary Affairs Minister Bikram Keshari Arukha announced in the State Assembly.Arukha made the announcement during a discussion on an adjournment motion moved by the Congress in the Assembly after both Congress and BJP legislators stalled the proceedings of the House blaming the Naveen Patnaik Government of promoting alcohol consumption and repressing anti-liquor agitations across the State.Arukha’s announcement of RDC inquiry, however, was rejected by both Leader of Opposition Narasingha Mishra and BJP Legislature Party Leader Basant Panda.The RDC probe has been ordered just to overcome the criticism that the government is facing over the police excesses committed at Namtara village, said Mishra.Panda questioned the RDC probe saying how an administrative probe can find out the lapses committed by the police.Both the parties had demanded formation of a House Committee comprising legislators of different parties to visit Namtara and investigate into the incident and the report could have been discussed threadbare in the House again.