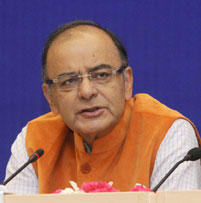 Odisha Channel Bureau New Delhi, Mar 16: Union Minister of Information and Broadcasting Arun Jaitley has said that Community Radio as a medium of communication constituted an integral component of the right to free speech and expression.“This medium of information dissemination formed a part of the “Airwaves”, the monopoly of which did not lie with state but with the people or the community.Airwaves constituted public property, the myth of state monopoly on the issue had been removed.As a platform of communication, community radio formed a part of the tripartite stakeholder partnership i.e.the broadcaster, the person disseminating the information and the listener who was keen for information, knowledge and dissemination of facts.”Jaitley stated this in his address at the 5th National Community Radio Sammelan on the theme “Community Radio for Good Governance” here today.Elaborating further, Jaitley said that Radio acted as an instrument for dissemination in the past, and would also do so in the future, in which community radio would play a critical role for the expansion of radio content.Community Radio as a concept was vibrant as it facilitated the expansion of an idea – a concept that discussed a range of issues including culture, languages, practices, etc.Regarding the deliberations of the three day Sammelan, Jaitley said that the Sammelan would provide a roadmap to the ministry to fine tune the roadmap for policy interventions in the future.The Union Minister further stated that the Government was committed to ensure that the sector was expanded and strengthened to achieve the goals of inclusive growth through social change.The Sammelan also offered an opportunity to highlight the relevance and importance of flagship schemes through the medium to the people and audience who in turn could benefit by such interventions.Sessions on Agriculture and Community Radio, Role of the Medium in promoting Water and Sanitation with emphasis on Swachh Bharat Abhiyaan and the relevance of the medium in the context of Jan Dhan Yojana were innovations adopted for the Conference.A compendium on ‘Community Radio for Good Governance’ was released on the occasion by Jaitley and Rajyavardhan Rathore.In his opening address, Bimal Julka, Secretary (I&B) said that the Community Radio Model offered a third model of radio broadcasting in addition to commercial and public broadcasting.As a platform for communication they served geographic communities and communities of interest.Community radio, rural radio, cooperative radio, development radio holds key to unite India’s linguistic and ethnic diversity and improve economic development.Referring to a recent ruling of the Supreme Court, Julka said that the airwaves declared public property were to be used for promoting public good and ventilating plurality of views, opinions and ideas, and the role of community radio was important in this context.During his address, Secretary (I&B) also outlined TRAI recommendations on Community Radio Stations (CRS)’ permissions and related issues.He mentioned that the terms of permission to continue to be for five years; the duration of advertisement on a CRS to continue to be five minutes per hour; the stipulations that DAVP approved rates for advertisement on CRS were lowest and exclusive to DAVP to be relaxed in case of CRS.Shri Julka specifically mentioned the role and relevance of CRS during disaster management situations and said that as the medium played a critical role in the given situations consultations with NDMA would be held to outline the detailed guidelines for the said purpose.Shri Julka also referred to the TRAI recommendations related to the allowance to be given to CRSs to broadcast news and current affairs content, sourced exclusively from AIR in its original form or translated into in its local language/ dialect.This would enhance the mandate of the medium in the context of operating partnership with AIR.Jaitley also presented the 4th National Community Awards in various categories alongwith MoS, Col.Rajyavardhan Rathore.The awards were conferred in the following categories: Category: 1 -Thematic Awards1st PrizeRadio Kissan, Anantara, Balipatana, Distt.Khurda, OdishaAme Apanka Sathire (We are with you) in Odiya2nd PrizeRadio Media Village, Kurisummoddu, KeralaBy the People in Malayalam3rd PrizeRadio Shamalavani, Madurai, Tamil NaduThe Land of a Wedded Life (Vaakapatta Boomi) in Tamil Category: 2 -Community Engagement Awards1st PrizeAnna CR, Chennai, Tamil NaduMagalir Neram (Time for Women) in Tamil2nd PrizeVayalaga Vanili, Kottampatti, Madurai, Tamil NaduVuluthundu Vaalvom (Surive by Agriculture) in Tamil Category: 3 – Promoting Local Culture Awards 1st PrizePant Nagar Janvani, Pant Nagar, UttarakhandAnchal Ki Surbhi in Hindi2nd PrizeRudi-no-Radio, Ahmedabad, GujaratCharan Kanya in Gujarati Category: 4 – Most Creative Innovative Programme Content Awards1st PrizeRathi Vani, Comibatore, Tamil NaduPothumada..Sami (It’s enough..more than enough.) in Tamil The conference assumes importance in view of outlining the vision for community radio in India.One of the key highlights of the three day Sammelan is the session on Access to Justice for poor and marginalized communities in the context of the role of community radio and the work done by the National Legal Services Authority.The conference will also deliberate upon the integration of CRSs and PRIs.The role of CR stations in promoting livelihood generation and other economic activities would be discussed.Sessions on Community Learning, Emerging Demography and Migration would provide critical inputs in taking the process forward. The community radio sector has witnessed a remarkable growth in the past few years due to several initiatives taken by the Ministry of Information & Broadcasting.The Ministry has so far issued 409 permissions to set up community radio stations in the cou0ntry.Out of this 179 stations have become operational while others are in the pipeline.The Ministry has also streamlined the approval process for setting up of Community Radio Stations.The applicants can now apply online and track the status of their pending application through a Comprehensive Community Radio Management Information System.A Facilitation Centre has also been set up, with a Toll Free Number (1XXX-XX-6346) for providing information.Efforts have also been taken by the Ministry to enable Community Radio Stations to sustain themselves.The Ministry has also introduced a Plan Scheme to provide financial assistance to existing and new community radio stations for infrastructure/ equipment/ training/ capacity building etc.