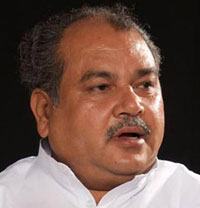 Odisha Channel Bureau New Delhi, April 2: Union Steel and Mines Minister Narendra Singh Tomar today said that the new Mines and Minerals (Development and Regulation) (Amendment) Act, 2015 will result in simplification of procedures and avoidance of delay in the mining sector.Addressing the media persons here, Tomar said that as soon as the amended Act is notified in about a week, the draft rules will be circulated to the States.In respect of ten minerals in Part C of First Schedule (like iron ore, manganese, bauxite, copper, gold, etc.), State Governments needed to obtain the prior approval of the Central Government before grant of mineral concessions, he added.The amendment removes the need for such “prior approval” from the Central Government, thereby making the process quicker and simpler.Similarly, approval of mining plan by the Government would no longer be mandatory as a proviso has been added under Section 5(2) (b) permitting the State Governments to devise a system for filing of a mining plan obviating need for prior approval by the Government, Tomar said.On the question of the pendency of applications for renewals, the Mines Minister said that to provide a transition to the new system, the Mining Leases would be deemed to be extended from the date of their last renewal up to 31st March, 2030 (in the captive miners) and till 31st March, 2020 (for the merchant miners) or till the completion of the period of renewal already granted, if any, whichever is later.It is expected that this would immediately permit mines that have got closed due to want of decisions on their applications for second and subsequent renewals to start their operations, subject to the necessary clearances like forest and environment.The previous approval of the Central Government will not be required for grant of mineral concession except for Atomic Minerals and Enabling powers for reservation for the public sector are to continue in the Amended Act, Tomar said.The Amendment removes discretion in the grant of mineral concessions.All mineral concessions are granted by the respective State Governments.They will continue to do so, but all grant of mineral concessions would be through auctions, thereby bringing in greater transparency and removing discretion.This should also mean that the Government will get an increased share from the mining sector.Unlike in the 1957 Act, there would be no renewal of any mining concession.The tenure of mineral concessions has been increased from the existing 30 years to 50 years.Thereafter, all mining leases would be put up for auction and not for renewal as in the earlier system, he added.In reply to another question, Tomar said that the MMDR Amendment Act makes it mandatory to establish a District Mineral Foundation (DMF) in all districts where mining takes place.This is designed to address a long time grievance of civil society that people affected by mining are not cared for.Contribution to the DMF of an amount not exceeding one-third of the royalty rate in so far as new concessions to be granted by auction are concerned and not exceeding the royalty in respect of existing concessions has been provided for.The Act also makes it mandatory for State Governments, while framing rules to give effect to the DMF, to conform to the provisions of such Acts as the Panchayats (Extensions to Scheduled Areas) Act, 1996, Scheduled Tribes and Other Traditional Forest Dwellers (Recognition of Forest Rights) Act, 2006 as well as provisions of the Constitution relating to Fifth and Sixth Schedule areas, he said On exploration of minerals, Tomar said the amendment proposes to setup a National Mineral Exploration Trust created out of contribution from the mining lease holders.This would allow the Government to have a dedicated fund for undertaking exploration.In addition, the transferability provision (in respect of Mining Leases to be granted through auction) would permit flow of greater investment to the sector and increasing efficiency in mining.Citing stringent provisions against illegal mining in the new Act, Tomar said that all offences under the Act will now be subject to a maximum punishment of 5 years imprisonment or fine of Rs.5 lakh per hectare.State Governments are also empowered to set up Special Courts for speedy trial of offences under the Act, he added.