Odisha Channel Bureau New Delhi, April 3: Gujarat was ahead of other states in building of household toilets, while Odisha was ahead of other states in construction of community toilets under the Swachh Bharat Mission during 2014-15.According to an official release issued by the Union Urban Development Ministry here on Friday, Gujarat has led others in the implementation of Swachh Bharat Mission during 2014-15.Out of the 2,70,069 household toilets constructed during the last financial year, Gujarat alone accounted for 60% of them having built 1,65,376 household toilets.Madhya Pradesh has constructed 99,151 household toilets followed by Karnataka with 4,697. 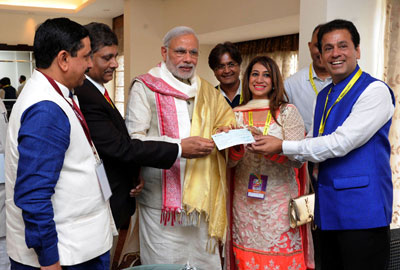 In promoting solid waste management also, Gujarat led others having reported 100% collection and transportation of municipal solid waste in 120 of the 195 towns in the state.Odisha has done so in respect of 107 towns and Karnataka in 40 towns.In all, 329 of the 4,041 statutory towns have reported 100% collection and transportation of municipal solid waste, according to the Ministry.In the construction of community toilet seats, Odisha was ahead of others having constructed 740 seats during 2014-15.Andaman & Nicobar Islands reported construction of 200 and Karnataka has built 100 community toilet seats.A total of 1,222 community toilet seats have been built during 2014-15.Swachh Bharat Mission was launched on October 2, 2014 with the objective of ensuring cleanliness in all the 4,041 statutory cities and towns of the country by October 2, 2019 which marks the 150th birth anniversary of Mahatma Gandhi who had emphasised the importance of cleanliness soon after his return to India from South Africa.The five year Swachh Bharat Mission is to be implemented at a total cost of Rs.62,009 crore with a targeted construction of 1.04 crore household toilets, 2.51 lakh community toilet seats and 2.55 lakh public toilet seats besides assisting 37 crore urban people in solid waste management.Construction of toilets is accorded priority under the Mission to enable ‘open defecation free’ urban areas.During 2014-15, a total of about Rs.900 crore has been sanctioned by the Union Ministry of Urban Development and an amount of about Rs.700 crore has been released to States/UTs based on proposals received under Swachh Bharat Mission.Implementation of the Mission is expected to pick up momentum from the current financial year onwards, according to the Ministry.